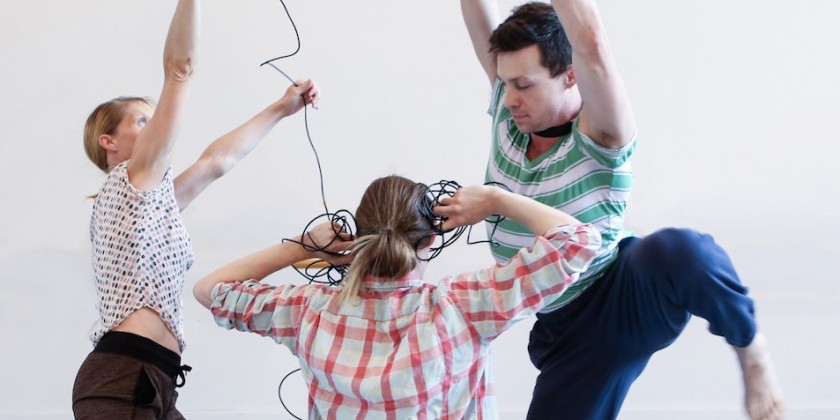 Blue Room stretches the boundaries of how human beings interact and how they should interact. As they do this, music helps them express themselves. Blue Room was a bit difficult to watch initially. It took some time to understand the message because it is not the typical dance experience that one would anticipate to tell the story that it actually does convey.

A black room, a black floor and blue tape. The scene opens with organized chaos. The first proponent is introduced. The characters are nameless beings who are adapting to the rules of the Blue Room. A nameless man (Nikolas Owens) enters with a set of pink headsets. The Blue Room is filled with the music he loves and this his thought, his beliefs, his modus operandi. Four other dancers enter and soon a struggle for the headsets begins.

As each dancer gains control of the headsets, their music, their thought and their beliefs change the Blue Room. At first this struggle causes them to indeed be blue. Soon, the boundaries of the room are extended to the wall as well. Blue tape lines the wall of stage left and "he" (Jordan Morley) tries to make a connection, past the boundaries of misunderstanding only to face an initial rejection from Jordan Morley and Mei Yamanaka as they explore the boundaries of touch, which culminates into a kiss. He

Music continues to play. Bluesy music. Rock music. Classical music. Surprisingly, hip hop and tap are missing from this repertoire. However, feet stomp, backs arch, angular non-graceful movements ensue. Each person forces their view of the world on others. Eventually as the boundaries of the Blue Room are tested, more and more boundaries are stretched. And then they are not. As further understanding of each other progresses, the boundary of the Blue Room becomes smaller. Blue tape is peeled off by Jordan Morley as well as the rest of the dancers (Six in total!). Emily Pope as well as Kenneth Olguin at some point dominate the Blue Room. The nameless character played by Kenneth Olguin at one point tips the headphones and dominates the Blue Room even as its parameters become smaller. The others are forced to watch as he jumos, rolls, stomps,etc. But eventually, after a metamorphosis occurs as the Blue tape is extended to the sky and Nikolas and Mei again find love, they all seem to come to a mute consensus that the boundaries of the Blue Room must be destroyed. Soon, there is no Blue Room. a black floor allows them all to be free for that moment. Exit stage left and stage right. The audience is left with a reminder that we are to leave our Blue Rooms behind and extend ourselves past our own preconceived boundaries as well as the boundaries of society set to keep us enslaved to rules that may be arbitrary. However, without certain rules society would not be able to function. As society changes, some laws should remain but in our personal lives we are challenged to destroy the Blue Rooms.

Review of ‘Creditors’
Review of ‘Pula! Botswana on Broadway’
Review of MOMIX at the Joyce
Review: The Reception