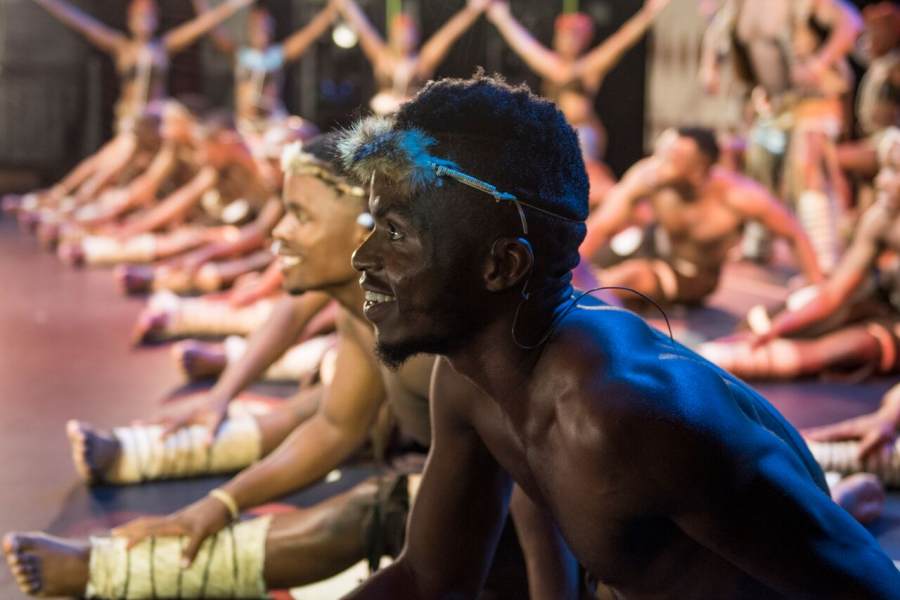 "In the village, the most respected man is the rainmaker." - The Narrator

Hips twisting, legs moving in a circular fashion as arms are drawn apart and out in a way that shows the progression of something being given or drawn inwards…flips, jumps, skips and through such movement and song the audience experienced a plethora of emotions for two hours. Cries of “Beautiful!” were heard throughout this production. What production is this author speaking of, you may wonder.

Pula, the currency of Botswana, is also the name of a Broadway show (Pula! Botwana on Broadway) that was recently presented by Battery Dance and the Botswana Tourism Organisation at the PlayStation Theater. The narrator, Mr. Gofaone Gabriel Modise, introduces us to a village in 'Batswana' who cherishes Sechele, the God of the rain. The viewer follows the narrator as well as the village through several stages such as ploughing, schooling, becoming an adult, marriage (via a dowry), and a drought that leads to the transformation of a new leader, the Rainmaker's daughter. At each step, until the last thirty minutes, the audience is led by the voice of the narrator. So, it seems strange when his voice is missed for a time. But the narrator can explain the village and the history of Botswana; he cannot take us on the spiritual journey that will present a new leader and transform a village and perhaps in some sense a nation.

This show was poignant in more than one way. The viewer/audience member was not only able to see the transformation of a village through hardship, hope and a near-redemptive act of the rain coming after a long drought and journey, but one was brought there through a native language, subtitles and intricate dance patterns. And of course, who could forget the Rainmaker aka the son of god? One can never forget the rainmaker!

The color choice of a basic brown and white in the beginning lays the foundation for the earth and its importance to the villagers. However, one is not left there. Eventually, just as they mature as a people and grow as a people, so does their worldview. Soon, one sees red and yellow, pink, black and white, blue, etc. And why not? Because the evolving colors show and evolving culture. After all, Mr. Modise did tell his audience that: “Culture is not complete without the rain.”

In other words, this is a tale of a village in Botswana - it is a riveting, rhythmic, colorful, powerful, informative and socially invigorating one which I would encourage everyone to see when Pula! returns to Broadway. Get ready for a long stretch of music and dance but embrace that eventually, the Rainmaker, the journey of his daughter, and the village’s prayers will reach Sechele. And as the Rainmaker’s daughter is forced to take her rightful place as leader for her people, so the audience is forced to consider the importance of hope and faith even when all odds appear to be against them. And they are forced to consider this and be transformed as the rain comes!

In Manhattan at The PlayStation Theater