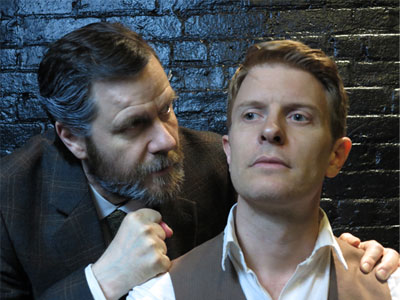 Creditors is a play about a married couple, an ex-lover/a false friend, who toy with one another until one falls down. You will like it if you like psychological thrillers. You will dislike it if you are uncomfortable with relationships that border an illusion of an incestuous relationship.

"My wife has an independent nature." "But as soon as she leaves, I miss her." - Adolf

Originally written in Danish, this play opens with Gustav counseling his friend (i.e., a friendship of one week or so) Adolf about his marriage to Tekla. They are sitting in what appears to be a sitting room. Adolf is sitting in a chair and pouring glasses of alcohol one at a time from a round table while Gustav, is sitting on a red lounger. Ironically, the lounger looks like one that a client in Sigmund Freud's office would be sitting on while confessing their ills. However, the scenario is reversed. Gustav, the teacher seems to be in Freud's place, while Adolf, the artist appears to be confused about his emotions and thoughts. Two lights flicker as these two men go through the throughs of banter, conversation, rage, argument and then come to a compromise of sort...a way to see if Tekla is true.

The irony of this play is that Adolf has an utter trust in a stranger who he has taken as a friend after hours and hours of conversation each day. At one point, Adolf begs Gustav to stop because they had been talking for six hours and Gustav makes Adolf continue. At some point, for those who are familiar with avant garde movies, you may be reminded of the movie Gaslight as it is soon becomes clear that Gustav is manipulating Adolf in a way that is seemingly untoward. Although, all is forgotten as Adolf decides to take Gustav up on his offer and to “test” Tekla.

Gustav hides in the back room as Adolf and Tekla (who appears In a pink dress) begins to discuss their marriage and address one another as “brother” and “sister.” Terms that Gustav had frowned upon. Soon, Tekla is reminded by Adolf that Adolf lacks faith because he gave it all to her to make her a better writer. Tekla reminds Adolf that he said other men wouldn’t find her attractive and that is why she was flirting and possibly courting other men. While Adolf claims that he does not care about her indiscretions, one begins to understand that the dynamics of this “marriage” leaves something to be desired while at the same time they both still desire one another. Finally, Adolf leaves and Gustav and Tekla have a conversation of a personal nature where it becomes clear that Gustav is also “gaslighting” Tekla and toying with her emotions as they once knew one another. When Adolf returns, all is lost and Tekla is heartbroken as she loses more than she had expected to lose and gains less than she had expected to gain. All debts are settled when “Creditors” comes your way!

August Strindberg (1849-1912) is Sweden's national playwright and leader of the Naturalist and Expressionist movements in theatre and fiction. He exerted a strong influence on Tennessee Williams, Edward Albee and Maxim Gorky; Eugene O'Neill cited him as the only playwright to do so. Strindberg wrote over sixty plays, most still in production on the stages of Europe, more prose than drama and more non-fiction than prose. Were his plays not so successful, he might be even more famous as a novelist than playwright.