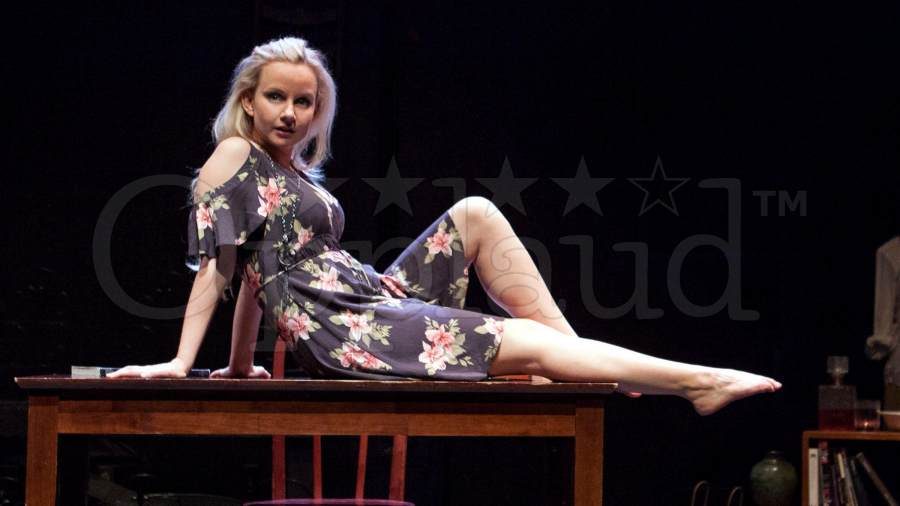 Beloved makes its United States debut at the Lion Theatre on Theatre Row with the Scandinavian American Theater Company. Written by Lisa Langseth and translated by Charlotte Barslund, Beloved is one woman’s story of obsession: with a man, with classical music, and with an enlightened life. I had high hopes for this production, as it originated on the Swedish stage with Noomi Rapace starring as Katerina. It was then adapted to film with Alicia Vikander and directed by the playwright. Despite the pedigree of the women involved in its many incarnations, this New York production falls flat at its best, and borders on absurd at its worst.

Ellinor DiLorenzo starts as Katerina, a woman who becomes dissatisfied with her life, and Mattias, her simple boyfriend, after they attend an opera that she won tickets for during a call-in radio contest. She says that Mattias was bored and fell asleep, but she was captivated. She explains that she felt as if “the music gave birth to me,” rendering her life meaningless in the absence of music and the pursuit of human experience beyond societal norms. Transformed by the music and glamor of that intellectualized circle, she applies for a job as a receptionist at the opera house and is soon infatuated with the company’s alluring conductor, Adam. They soon embark on an intense physical affair, which Katerina describes in explicit detail. What could have been an exploration of the alchemy of intellectual and sexual passion, plays as an echo of Fatal Attraction: the woman rendered mad by a man. Per the director, Kathy Curtiss: “The play accesses the vehicle of intimate love and sexual attraction to clarify a rich, many layered exploration [sic] the human psyche and the visceral necessity of passion,” however noble that vision, that is not what transpires on stage.

DiLorenzo is alone onstage during the entire production, telling us her story, and this feels like a counterintuitive choice when considering her journey. That is, Katerina discusses her relationships--with her mother, Mattias, Adam, and other women--as if she is incisive and wise, but in reality, she is incredibly naive and childish. Sure she is enthralled by this intellectual, successful man, and interested in music and philosophy, but she is young and impressionable. In fact, Katerina peppers “f*cking” in her speech, like a kid who just found out that cursing was cool and wants to use it ad nauseam. If these aspects of her self-narration were skewed a little more for comedic effect, it would be more successful, but we are meant to take this play seriously and sincerely, so it all gets muddled somewhere in between.

DiLorenzo certainly commits to the role, but essentially tries too hard to animate Katerina through her mannerisms, tics, and movements--to the point of distraction. Within the first five minutes, she had run her hand through her hair numerous times. At a certain point, it makes the audience wonder: why doesn’t she just put it up?! DiLorenzo should have had faith in the words she was saying; grounding her efforts into the language itself. We would have understood Katerina and her motives much better, if that had been her focus.

If this review seems unfocused, perhaps it mirrors the confusing narrative of the play. Although meandering can work when based on conversational, elliptical delivery through an actor’s extended monologue…it doesn’t play off here. Things happen, they aren’t dealt with, they are ignored, and Katerina moves on to something else.

I left the theatre feeling like the surface had been scratched, and all I heard were nails on the chalkboard.

Review of ‘The True’
Review of ‘Fire in Dreamland’
Review: Actually
Review: After the Blast