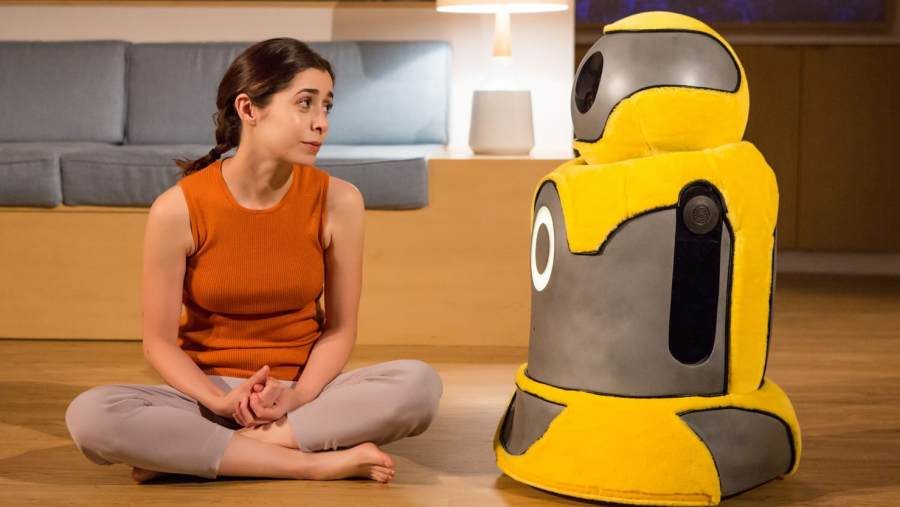 In this time of anxiety regarding the present and uneasiness about the future, it might feel as if the arts are, at best, escapist fodder and, at worst, self-indulgent vanities. Certainly, Alec Baldwin’s Trump impression on Saturday Night Live, though impeccable, offers a meager consolation in the reality of its inspiration: a man who seems capable of starting a war with the same ease he has when publishing streams of trigger happy tweets.  To be sure, it is difficult to laugh at a joke when the world feels beyond humor, beyond the former limits of absurdity. It might feel crass and cowardly to escape this new reality, if only for the duration of a joke, a book, or a play, instead of dealing with it head on, in truth and sober honesty.  Now running at the Lincoln Center’s Claire Tow Theater, After the Blast, directed by Lila Neugebauer, deals with this tension between reality and chosen illusions in its own provoking way, with equitable humor, empathy, and pathos.

Zoe Kazan, perhaps most widely known for starring with Kumail Nanjiani in the hit film, The Big Sick, wrote After the Blast, and exhibits a formidable talent for writing as deftly as she performs on stage and screen. The play is mainly concerned with the relationship between Oliver (a fantastic William Jackson Harper) and Anna (an astonishing Cristin Milioti), who live underground following a nuclear catastrophe. They are part of a small group, the best and brightest, who have been chosen to colonize and repopulate, albeit in a fashion that is highly controlled in order to conserve resources and better guarantee success. Anna is depressed, however, and she and Oliver are on their fourth out of five chances to be granted “fertility.” The prospect of a baby is an ideal that Anna struggles with given their living situation (i.e. underground, antiseptic, base-level bleak), and her depression has hindered their previous chances. Oliver, believing that a baby is the answer to what they both desperately want, gives Anna a robot to train, certain that it will pull Anna out of her depression and better their chances when applying for fertility. She nurtures the robot, teaching him and finding a companion in him while Oliver works tirelessly as an environmental scientist, monitoring the viability of above ground occupancy. Some of the most poignant exchanges are between Anna and the robot, Arthur (Will Connolly), because her desire for connection, purpose, and an articulation of her experience are made all the more touching when directed at a machine.

To delve further in the plot would be a disservice to the magic on offering here but Kazan is sensitively navigating the murky, ethical waters of what it means to deceive ourselves and the ones we love when faced with stupefying adversity--whether that deceit be out of love for another or out of our own need to escape. Kazan appears to land on the belief that if these illusions--much like the best works of art--do not numb us into complacency or delusion, but better ourselves and assist in working towards an ideal future, they are not harmful but entirely necessary.