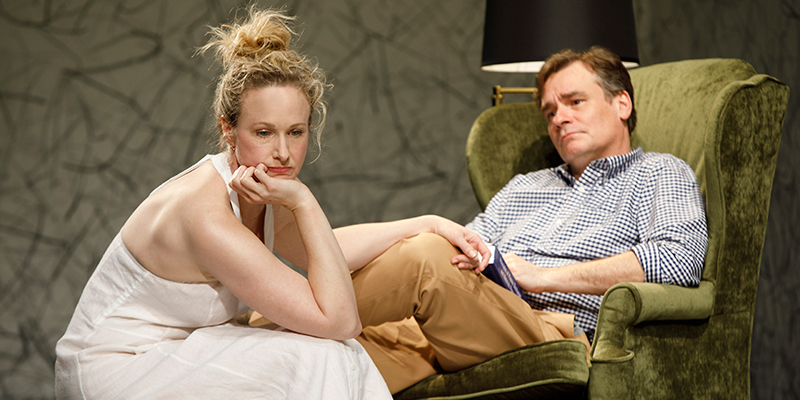 While At Home at the Zoo intends to add symmetry and depth to what Albee found previously lacking, the choices of this production make the venerable playwright’s intentions ultimately fall flat. The setting of Homelife -- or more appropriately, its lack of setting -- is detrimental to the territory that it navigates, that of a seemingly content marriage between Peter (Robert Sean Leonard) and Ann (Katie Finneran). Peter sits in a green velvet chair, a floor lamp beside him; these serve as the only markers of the home they share in assumed comfort as an upper-middle class, Manhattan family. The stage is white walled with strokes of black, like erratic charcoal sketches, and there are no physical or visual cues of the space cohabited with their daughters and cats (or kept birds).

Homelife seeks to obliterate the notion that a successful marriage, full of love and goodness, is synonymous with true knowledge of the other, as well as the notion that this goodness and “smooth sailing” eliminates sadness, doubt, or longing for the involved parties -- those things not worth talking about, because they cannot be fixed. Through their conversation, Peter and Ann learn that there are many secrets they haven’t shared -- one sleepless evening Ann considered getting her breasts removed; Peter reveals the details of a sexual encounter from his fraternity days. As much as they know by proximity, there is a wealth of lack -- especially concerning the intersection of sex and body. Yet much of the payoff for this conversation is lost because we don’t know their home and what they do share. Ann, dressed in a white dress and barefoot, appears statuesque, almost like an ethereal muse, not a wife and mother haunted by animalistic desires. Albee emphasizes that so much can be shared and NOT shared, yet this truth does not benefit from the minimalist staging.

The Zoo Story, however, is a spectacular showcase of the wickedly talented Paul Sparks as Jerry, a man who interrupts Peter’s repose of afternoon reading in Central Park. Sparks steals the show as the off-putting yet endearing stranger, a man so desperate for connection and love in the alienating New York City, that what was meant to seem like a cage in Homelife, is presented as a comforting desire in The Zoo Story: home, family, and love. He is alone, impoverished, and desperate. I was captivated by Sparks: his movements, his pauses, and his embodiment of Jerry were exhilarating. Each acting decision he made added a depth unworthy of the flat staging -- the same sketched walls and a half circle of park benches. At once rejecting and begging for acceptance and understanding, Jerry speaks for most of The Zoo Story, as if once he stops speaking, Peter will brush him off and leave him to his crippling loneliness. When he knows that this conversation cannot go on forever, he instigates the confrontation that will lead to a heartbreaking climax.

Homelife was meant to complete The Zoo Story, but despite strong performances (particularly from Sparks) something is still missing from this production of At Home at the Zoo.

At Home at the Zoo

Review of ‘Peace for Mary Frances’
Review: A Psychiatrist Conducts his Patients in So...
Review: After the Blast
Review: Fucking A