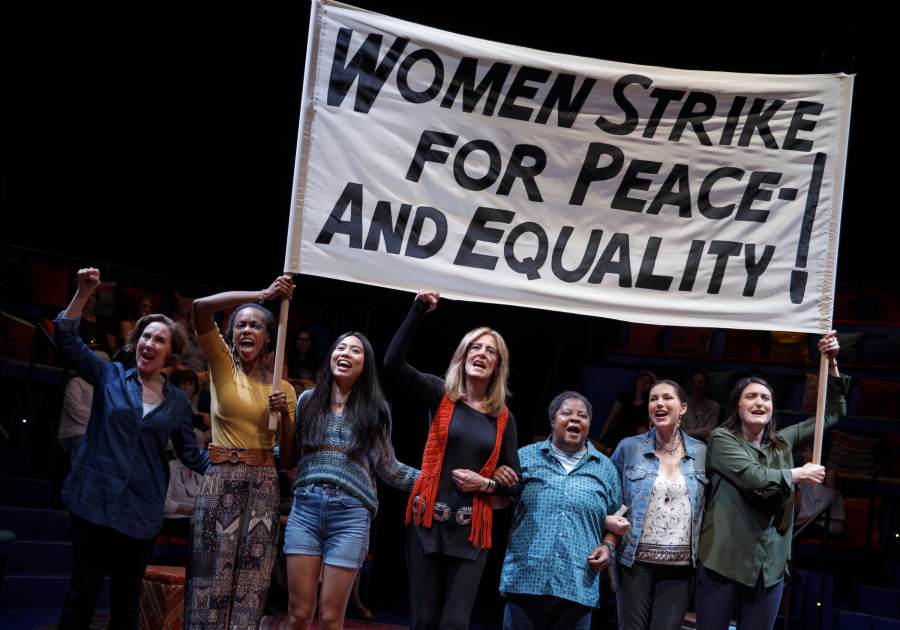 The midterm elections are over and a record-number of women won seats in the House of Representatives.  As of November 11, there were 99 compared to the 12 - 30 years ago when Nancy Pelosi was elected.  In great part, the progress of women is due to the contributions of early feminists like Gloria Steinem.  At the Daryl Roth Theatre, Christine Lahti portrays the journalist-activist in the show “Gloria: A Life”

Directed by Diane Paulus, the two-hour show has Gloria directly addressing the audience and detailing her life story.  Lahti, earnest, incredibly blond and svelte, takes the audience through the journey. There’s particular emphasis on the creation of Ms. magazine and the female mentors she met along the way. Some of these mentors were famous figures like Bella Abzug, others less so. She also notes the connection of the women’s movement to other civil rights issues.  The show includes a segment about her stint as a Playboy bunny which Steinem notes she regrets. She proudly mentions that she was included on Richard Nixon’s enemies’ list. She is poignant as she talks about her mother who, herself was a journalist but ultimately suffered from severe depression. The character suggests Steinem’s guilt and fear about becoming a woman like her mother.  She also notes the naivety of the women saying that they felt if they explained what was wrong “people will want to fix it.”   Yet she remains a “hope-a-holic,

The talented, multicultural ensemble of six actresses play all the other characters including the men. In reading the Playbill, one would notice that most of the creatives involved in the show are women. The theater is in the round and images are flashed on two sides of the theater space.

The play includes some current references, both to the recent confirmation of Justice Kavanaugh and to the elections as well. Then, with a brief pause, the show begins a 20 minute talking circle with audience members getting to comment and share. Our particular talk back, which may be typical, become a praise fest with audience members lauding Lahti, Gloria and the cast.  In addition, speakers praised their own inspirational mothers.  Our audience ranged from age 15 to 88. In the theater that contained about 275 people, only about 25-30 were men.

This show may educate you about the movement, or if you lived through much of it, will remind you of what transpired. I was aware of the marches and conventions, but, quite frankly, was unaware of the hatred and viciousness Steinem endured and how courageous these early feminists were.

"Gloria" will not persuade anyone to change her mind; it is a show for likeminded people. So if you are a feminist-activist, you will find yourself nodding in agreement with many of the ideas espoused by the characters.  In general, the show tends to be pedantic and somewhat of a sermon. Steinem’s story can be particularly informative for younger women who take some of the advances for granted. It can also be inspirational because of the message.  - one which many of the 99 newly elected female officials must have heard- “Don’t agonize, organize.”