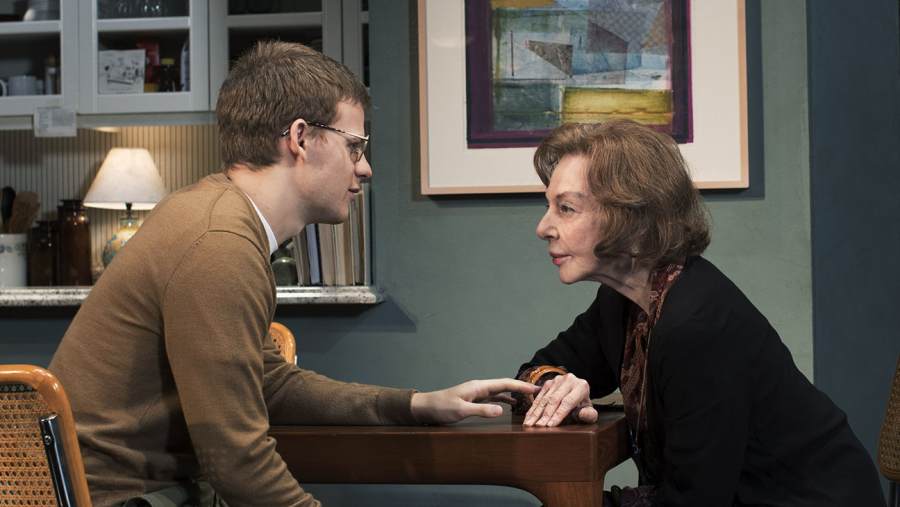 There are several stages of dealing with someone with Alzheimer’s and the revival of Kenneth Lonergan’s play “The Waverly Gallery” will take us through all of them. There’s humor and tolerance followed by frustration leading to anger and finally ending in resignation and acceptance.  In this case, the victim of this insidious disease is Gladys Green, portrayed by the marvelous Elaine May. May plays an elderly woman who owns a small art gallery downtown in a changing neighborhood.

When we first meet Gladys, she’s already in a bit of a decline, but like her grandson, Daniel (Lucas Hedges) and others around her, we all assume that her constant repetition and forgetfulness is more a product of a malfunctioning hearing aid than that of advancing age. Playwright Lonergan uses the hearing aid to get a few laughs.  Later it becomes apparent that her issues are far more serious.  As the play progresses, the truth becomes inescapable. The once vivacious and garrulous lady is suffering the ravages of Alzheimer’s.

“The Waverly Gallery” is a memory play told by Daniel, who addresses us from the front of the stage. As the play continues, he’s filled with guilt and remorse. Daniel addresses the audience, chronicling his grandmother’s decline. Later Daniel says he never wants “to forget what happened to her. I want to remember every detail, because it really happened to her, and it seems like somebody should remember it.”

Gladys was a vibrant woman who nurtured young artists, loved to throw parties and enjoyed talking with people. Gladys tells the same stories repeatedly through the course of the play, and at first we laugh, especially at her family’s frustration.

Her final artist, Don (in an understated performance by Michael Cera) is the only outsider we see with Gladys, and through those interactions, we see a glimmer of what she once was.  Upon learning that he’s come to NY to try to sell his art, and that he is sleeping in his car, she immediately offers him a showing of his work and even allows him to sleep in the back room of the gallery.

As her condition worsens, her family reacts in frustration. At one point, her daughter Ellen starts yelling when Gladys asks again and again to feed the dog.  Ellen is frustrated at the constant repetition and lack of recall. Later, even Daniel yells at his grandmother for waking him up several times at night. Bewildered, Gladys doesn’t understand their anger. It’s a depressing scene when Ellen finally moves the confused old lady from her apartment and Gladys starts yelling belligerently.

May is marvelous, touching, querulous and, most of the time, charming. It’s hard to remember that she’s actually the real age of the character she’s portraying.  She is familiar and we all recognize her; she is our mothers and grandmothers.

Ellen (Joan Allen) is beleaguered and saddened much of the time and Allen gives a sympathetic portrayal of a character who doesn’t want to face her mother’s reality.  She keeps threatening that if her mother comes to live with them, she’ll run away or will kill herself.

Despite the subject matter, often poignant lines, and old lady’s confusion, the audience  laughs frequently.  Some of it is in recognition - of Ellen’s plight or given the average age of the audience at the The Golden Theatre, perhaps acknowledgment of the Gladys in themselves.

One of the biggest laughs comes with Ellen’s second husband (David Cromer) loudly yells to tell Gladys  ”——-I SAID IT'S NO FUN GETTING OLD!  and the audience laughed in appreciation when she retorts, “Well, why do you always say that to me? Nobody wants to hear that – !”

Subtly directed by Lila Neugebauer, “The Waverly Gallery” is touching and realistic. By the end, no one is laughing; some of us even shed a tear. Gladys’s situation is distressing, much too real and inescapable. 80 is the new 60 on Broadway. Last season 82-year-old Glenda Jackson won the Tony Award for Best Actress for her performance in Three Tall Women.  This year 86-year-old Elaine May may do the same for her performance as Gladys Green. The real winners will be those who get to see her in this stellar performance.

In Manhattan at John Golden Theatre

Review: The Ferryman
Review: The Rose Tattoo with Marisa Tomei
Review – Gary : A Sequel To Titus Andronicu...
Review: Merrily We Roll Along