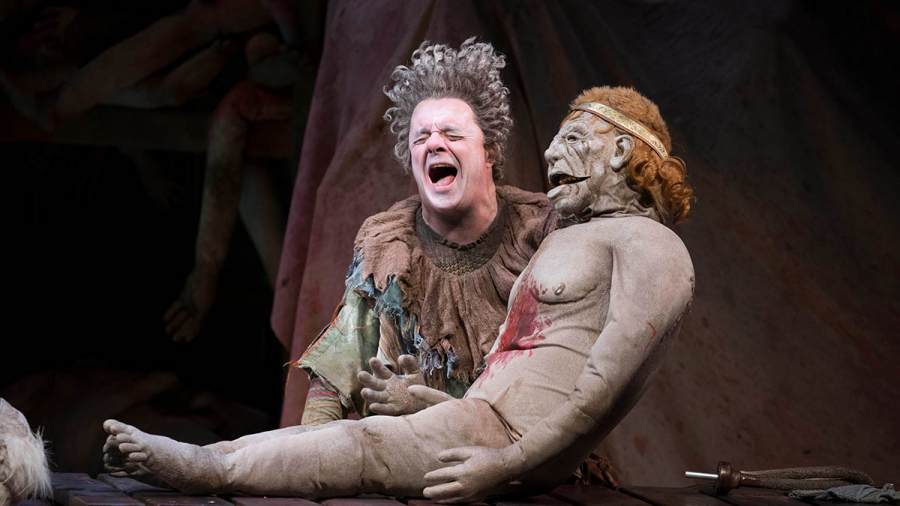 Before there were the gory massacres and rapes of GOT, there was “Titus Andronicus,” one of Shakespeare’s first tragedies. A revenge play, it was one of his most violent works ,and in it, all the central characters were killed, some in very unusual and creative ways. Inspired by the play and perhaps by the world today, performer-playwright Taylor Mac has written a play entitled “Gary: A Sequel to Titus Andronicus.”

If you don’t know the original play, you might miss some of the references to Shakespeare’s work. Among other atrocities, Lavinia, a beloved young woman, is raped and then maimed to keep her from identifying her rapist. Later, two young men are ‘served’ up to their mother in a pie. Gary is an unnamed clown in the original play, who, through no wrongdoing of his own, is sentenced to death.

In Mac’s sequel, Gary has talked his way out of the death sentence by volunteering to be a maid to help clean up the carnage. Gary, portrayed by the inimitable Nathan Lane, wasn’t a particularly good clown-juggler. (He juggled live pigeons - an interesting visual.) Gary is overjoyed and thinks becoming a maid is a step up. He even speaks in rhymes for several minutes until Carol, a real maid, chides him for it. Later he decides to become a fool, noting that “Fools, they tease out our stupidity / With brains, so spark our feelings and our smarts.”

Carol (the wonderful Kristine Nielsen) survived the carnage because she is anonymous. In addition, she is experienced at cleaning up massacres. Nielson is gruff, surly and dour. She is always barking her lines, quite a difference from the playful Lane.

With the deft direction of George C. Wolfe, the prologue is delivered by Janice, a midwife, played by ditzy Julie White. She seems a bit spacey as she introduces the play and then something strange happens, confusing her and the audience as well. (More details will ruin the effect for the audience.) The scene sets the mood, comic but off-beat with a touch of the macabre.

The three performers are all skilled experienced comedians. Lane is typical Lane, whether in a comedy or a straight play, and “Gary” is a combination of both. He’s mincing, playful, irreverent and sexual (especially with the many male bodies piled up behind him.)

In one of the funniest scenes of the play, Carol instructs Gary on how to prepare a dead body. After stripping off clothes and accessories from the corpse, the maid must release some of the gases. If you enjoy humor involving flatulence, you will love this scene, especially as Gary ‘plays” a little tune with a corpse’s toes.

In a theater season filled with some extraordinary scenic design, Santo Loquasto has created an impressive setting. It is a mass of all male dead bodies; Carol insists upon covering the female bodies since they are all victims. The haphazard pile nearly reaches the ceiling. None of them are realistic enough to be disturbing, yet the bodies are distinctive enough to allow Lane to interact with them.

Gary bursts into tears at “the state of the world,” and finally urges Carol to stage a coup to become the next emperor. So the characters begin to create an artistic coup. “An onslaught of ingenuity that’s a transformation of the calamity we got here. A sort of theatrical revenge on the Andronicus revenge.”

Despite being ribald and often absurd, “Gary” reminds us that those in power cause the wars and create the destruction, but the powerless little guys either stand by and do nothing, become collateral damage or must clean up the wreckage. Shakespeare’s play was written in the late 16th century and was based upon source material that was even older. Yet, sadly little to nothing has changed. It’s up to the little guys and the fools to fix the state of the world.