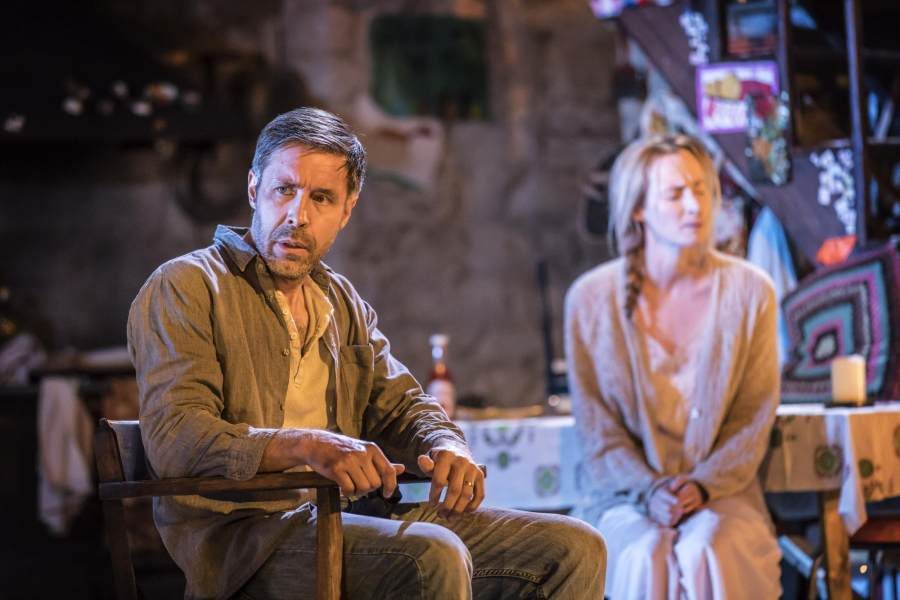 The prologue sets the tone that will quietly pervade the lengthy work “The Ferryman,” the new masterful work by Jez Butterworth, (“Jerusalem”):  When a dead body is discovered in a bog, it is identified as that of Seamus Carney, who disappeared ten years earlier.  Although there had been purported sightings of him over the years, no one knew whether he was still alive. The surprise visit of a powerful IRA leader known only as Muldoon suggests something even more sinister. Along with two IRA thugs, Muldoon comes with honeyed tones to blackmail the local priest.  He wants assurances that Seamus’s brother Quinn Carney (Paddy Considine) won’t blame the IRA for Seamus’ death. Quinn has a great deal of guilt at Seamus’ death since he was the one who convinced his brother to join the IRA.   Although we never quite learn why Seamus was killed, we anticipate the fallout.

Quinn Carney’s family is a large and boisterous brood consisting of his seven children and wife Mary as well as an elderly uncle and two peculiar aunts.  His sister-in-law Caitlin and her 14-year-old son live there as well.  Any gathering feels festive, and since it’s harvest, it’s even more likely that someone will put on music and the family will begin to dance.  Despite the conviviality and warmth inside the large family dining room/kitchen, the outside world is cold and harsh. And there’s a constant undercurrent of darkness and sadness.

The play’s title signifies something more portentous. It is a reference to Charon, the mythological ferryman who ferried the dead across the river Styx to Hades.  Set in Northern Ireland in the summer of 1981 during the time of the “ The Troubles,” the play is a story of close-knit family relationships but also of inflammatory politics. “The Ferryman” includes references to the hunger strike being waged by Republican inmates at Maze Prison and the deaths of several of them.

The tile is not the only touch of mythology in the play.  Uncle Pat is a Homer-like figure, a storyteller, introducing legend into the Irish tale, and Aunt Maggie Far Away (Fionnula Flanagan) who suffers from a form of dementia appears to be an Irish Cassandra offering her presentiments into the future. Much of the time she sits in her wheel chair motionless and oblivious until suddenly she becomes a vibrant onstage presence. The young girls beg her to tell them their futures. The third older figure is Aunt Patricia Carey (Dearbhla Molloy) whose bitterness and anger at the British provides backdrop and, more importantly, sets up the climactic conclusion.

The characters are genuine, yet unique and memorable, including Tom Kettle, who is “not all there.” He is somewhat reminiscent of Steinbeck’s Lennie, in Of Mice and Men, and even carries a live rabbit in his jacket.  Although he is an Englishman, Tom has become part of this very Irish family.

Although the audience feels the sense of foreboding, it’s hard not to enjoy the frivolity and love of family.  This is a close-knit clan who will do anything for one another. Quinn seems especially close with Caitlin (Laura Donnell.)  In fact, an early scene shows the two of them blindfolded and playing the game Connect Four, and their familiarity suggests that they are husband and wife.   By the time Mary, often ailing offstage, appears, it is apparent that Quinn and Caitlin ’s relationship might become troublesome.

For theatergoers who appreciate well-crafted plays and can acclimate to the Irish accents, the three hour and 15 minute play is a wondrous experience, with fine acting by a skilled cast and terrific writing by Jez Butterworth. Both predictable yet surprising, “The Ferryman” is absorbing, historical and even a bit quirky, yet it is always about the heart of everything - the family.

In Manhattan at Bernard B. Jacobs Theater