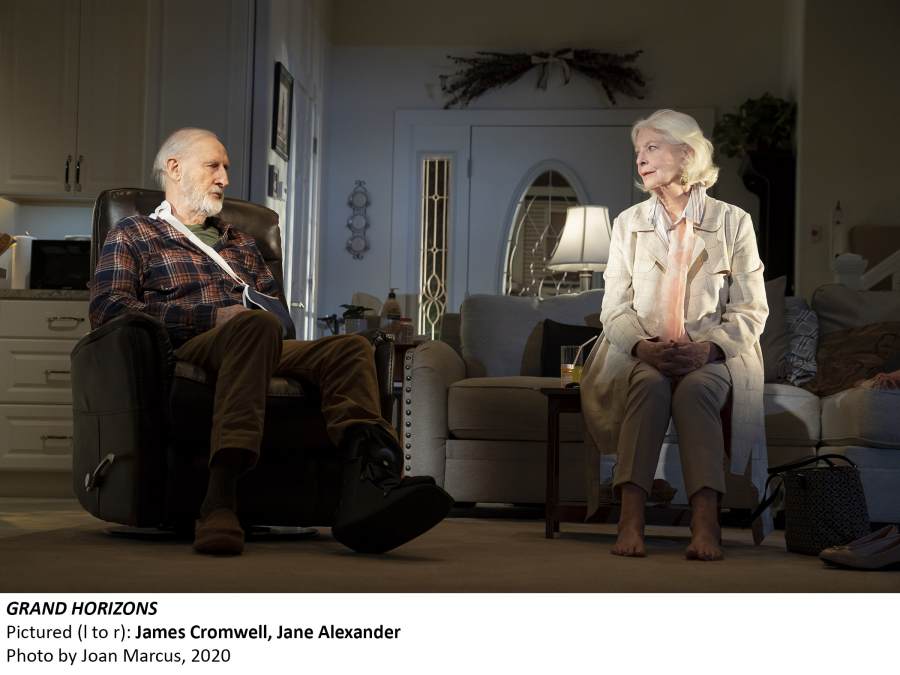 Even seemingly well-adjusted families can be messy. In the new play “Grand Horizons,” by Bess Wohl (“Small Mouths,” “Make Believe,”) a retired librarian, Nancy (the wonderful Jane Alexander) and her husband Bill (James Cromwell) have recently moved to a senior community. The community has a progressive living arrangement, and once someone becomes mentally or physically debilitated, he is moved into assisted living. The play is about love and marriage and how we fail to communicate. It also says a great deal about the relationships between parents and children.

In the quick opening scene, the couple does a well-choreographed ‘dance,’ at the small dinner table, ending with a flourish of napkins simultaneously opened and spread. After taking a sip from her glass, Nancy looks at Bill and calmly announces ”I want a divorce.” To which he responds, “All right,” and continues eating. The scene ends, but the comedy really begins when their children appear, determined to fix everything.

Even though they are grown men, their sons, Ben (Ben McKenzie) and Brian (Michael Urie) can’t accept the news. In fact, Ben and his wife (exuberant Ashley Park) are soon to have their own child, and Brian is a theater teacher with “over 200” of his own children. Their parents have been married for 50 years, and the divorce is totally unexpected to the younger men. Park plays a caricature of a touchy-feely therapist who tries to get her in-laws to be ‘touchy-feely.’ The scene makes all the characters feel awkward and uncomfortable, even though they do what she suggests.

A lawyer, Ben is logical and practical. McKenzie plays him a bit too stiff and straight. In contrast, Urie is totally emotive and borderline histrionic, even bursting into tears a couple of times. As usual, Urie is a delight, taking any moment and milking it for humor and laughter. His facial reactions, upon hearing his mother describe a sexual encounter she had, are hysterical. Like many children, Brian also makes everything about himself. As his mother shares the story of her affair, he’s fixated on the fact that, while she was with her lover, he and his brother were left at home alone. Brian even worries about where he will go on Thanksgiving once his parents split up.

Directed by Leigh Silverman, the play has the feeling of a dark TV sit-com with one initial premise-how can the two sons stop their parents’ divorce. In fact, the startling, albeit funny, scene which ends Act I, feels very much reminiscent of a comical episode of TV’s “Everyone Loves Raymond.” Despite some role-reversal with Ben handling his parents’ financial matters, offspring often behave like children.

Alexander is a fine actress, very ladylike and stately, so hearing her curse and reminisce about a sexual experience is a bit startling, and predictably the audience laughs. Although she carries it off well, she also gives her character strength and substance as well as longing and frustration. Cromwell has less to work with. His character is almost stereotypical; he says little and doesn’t share much until the very end. After years of working as a pharmacist, Bill’s now retired but taking a class to be a stand-up comic. Cromwell manages to be suitably stiff and awkward as he practices his patter with an imaginary audience. A few of his off-color jokes had the audience at the Helen Hayes in hysterics, partially because of the nature of the joke, but more so given that the teller is an unfunny 80-something year old man.

The cast is fine and even the secondary characters add to the humor. Bill has a girlfriend with whom he’s been sexting and who thinks he’s funny. Played by the feisty Priscilla Lopez, Carla brings a touch of sexuality and energy into the staid household. The apartment setting (scenic design by Clint Ramos) depicts a typical gated community, complete with sounds of one neighbor's dog barking and another watching crime shows.

Like many modern comedies, “Grand Horizons” has a darker side. Underscoring the humor, Wohl paints a harsh picture of marriage. Nancy describes it “as a boa constrictor.” She refers to marriage as “a box you try to claw yourself out of.” In fact, she warns Ben and Jess to work on their own marriage since they are having their own issues. We only see a little of it when Jess chides Ben for calling her ‘babe,’ a nickname he’s called her for years.

Although there are many jokes and funny scenes, there is an underlying seriousness. Yet like all good sit-coms, there’s a note of optimism. In the last scene, when Nancy and Bill finally get their sons to leave and it’s only the two of them, they begin to talk. They share thoughts and wishes, making us feel that maybe, just maybe, there’s hope for this marriage yet.