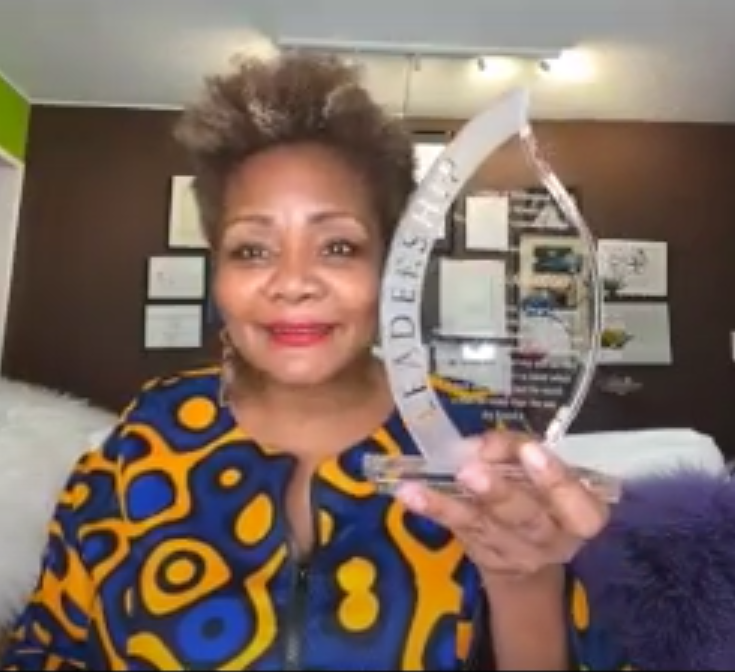 On December 7, the League of Professional Theatre Women presented the 2020 LPTW Rachel Crothers Leadership Award to multi-award winning actress, author, and activist Tonya Pinkins. In a ceremony hosted by Chuck Cooper, Lauren Turner (Producing Artistic Director of No Dream Deferred) presented the award over Zoom. The event also featured performances by Luba Mason and Darius de Haas, along with congratulatory remarks from Sylvia Sprinkle-Hamlin, Jacquelyn Bell, John Doyle, and others.

Pinkins' theatrical career includes playing the title role in the original production of Caroline, or Change on Broadway, receiving a Tony Award for Best Supporting Actress in Jelly's Last Jam, and appearing in nine Broadway shows, including the original cast of Merrily We Roll Along. She has also appeared in television shows such as All My Children, Gotham, and Madam Secretary. In addition to her impressive acting credentials, she is an educator, motivational speaker, author, producer, and director. She originated the hashtag #BlackPerspectivesMatter, and is an outspoken advocate for removing racism from American theatre.

Classic Stage Company Artistic Director John Doyle remarked on Pinkins' "significant contributions to American theatre." "You put your words out there to create extraordinary change," he said. "And the American theatre should be, and I hope is, very proud of you.”

In presenting the award, Lauren Turner spoke of Pinkins' personal sacrifices, such as leaving a racist production of Mother Courage in which she was starring. Turner said Pinkins has taught her to take risks, tell the truth, and know when to walk away. "Tonya Pinkins is an existing model of artistry, leadership, and Black womanness," she said.

But the best speech of the night belonged to Tonya Pinkins herself, who paid tribute to women like Rachel Crothers and Ethel Waters, spoke to the Black experience in theatre, and expressed appreciation for an America in which people are free to disagree.

"We were raised to be tools," she said, referring to herself, Ethel Waters, and other Black artists. "But within us is the gift of the potter. It's like trying to put the ocean in a glass. It spills over because it doesn't fit. My individual experience of not fitting in the story the world made for me is emblematic of what we’re experiencing today."

But she also expressed hope for the future. Citing the statistics of how many people voted for each presidential candidate in the recent election, and how many abstained from voting altogether, Pinkins said: "Perhaps that triad is America’s strength. Perhaps that triad that people view as disagreement is the holy trinity that is America. Maybe we don’t have to change anyone’s mind … But what we may need to do is build a world that can work for everyone."

In closing, she said, "Thank you for being here tonight and sharing this with me. It’s really, really an honor."

The LPTW Rachel Crothers Leadership Award honors women who have sacrificed for a common cause while also contributing significantly to American theatre. Yvette Heyliger and Margot Astrachan, Co-Chairs of the LPTW Rachel Crothers Theatre Award, and LPTW Co-Presidents Shellen Lubin and Mary Hodges spearheaded the event.