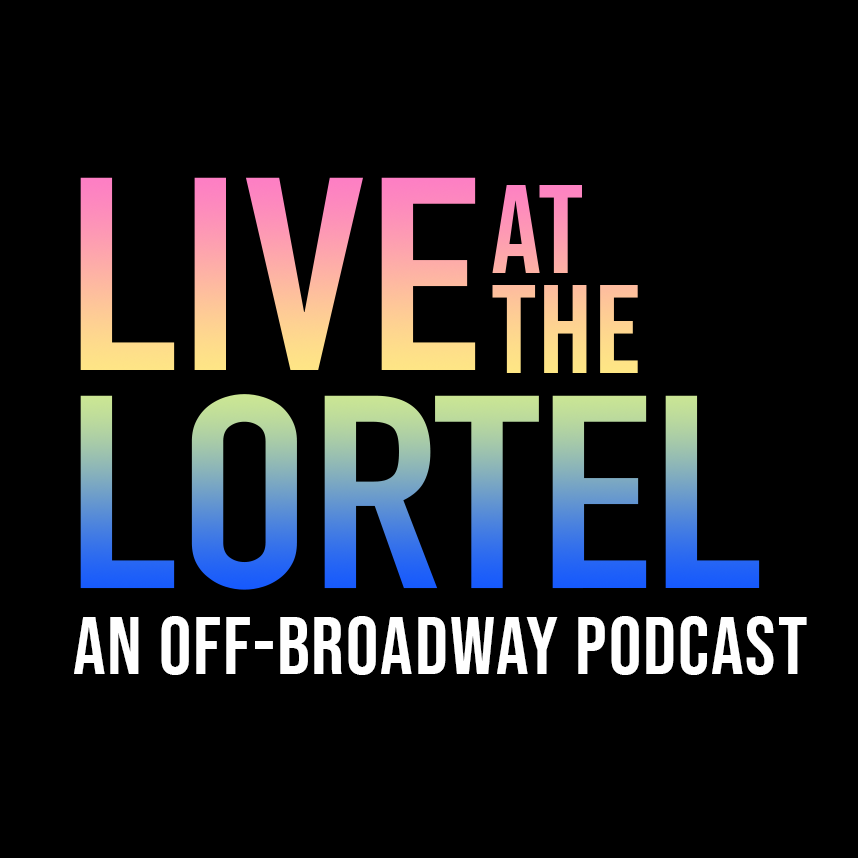 The live interviews will take place Mondays at 7:00 PM EST, offering theater fans the opportunity to view interviews and participate in a Q&A with artists. To join the audience, please visit www.liveatthelortel.com.

Hosted by Eric Ostrow along with co-hosts Joy DeMichelle, John-Andrew Morrison, and Daphne Rubin-Vega, season two of “Live at The Lortel” is dedicated to amplifying the voices and stories of people of color, members of the LGBTQ community, and artists who stand in solidarity with the continued fight against institutional racism and racial injustice. Theater makers will delve into their thoughts on the future of theater during this period of radical change. They will also discuss their craft, as well as their professional and personal projects that help to make theatre and the world more equitable.

Following each live interview, podcast episodes of “Live at The Lortel” will be available on Apple Podcasts, Spotify, and Soundcloud as follows:

Marti Cummings is a NYC drag artist, television personality, and political figure. Throughout a near decade long drag career, Cummings has been a regular fixture in the nightlife world performing up to 6 regular shows a week. They have sold out concerts at 54 Below, Lincoln Centers Big Apple Circus, Dixon Place and regularly tour the world with Atlantis Cruises. Cummings's album A Very Mary Holiday features some of Broadway’s brightest stars including Tony Award winner Cady Huffman and Tony Award Nominee Daphne Rubin-Vega. Cummings also appears on Fusion Television’s “Shade Queens of NYC,” on “The Marti Report” on LOGO, “Dragged” on Yahoo! and on The X Change Rate on “The Build Series.”

Michael Potts is an accomplished actor of stage and screen who most recently starred alongside Viola Davis and Chadwick Boseman in the Netflix film adaptation of August Wilson’s Ma Rainey’s Black Bottom. He is also known for his portrayal of the heartwarming “Mr. Hawkins” in the Tony® nominated musical The Prom. Potts received critical praise for his role in the Tony® nominated revival, The Iceman Cometh. In 2017, he starred as the notorious gossip “Turnbo” in the Tony® award winning production of August Wilson’s Jitney. That same year, Potts appeared in the stage adaptation of George Orwell’s dystopian masterpiece 1984. Potts is widely recognized for his role as the well-mannered yet feared assassin, “Brother Mouzone” on HBO’s critically acclaimed series “The Wire” and as “Detective Maynard Gilbough” in the Emmy® Award winning HBO drama “True Detective.” He is also known for originating the role of “Mafala Hatimbi” in the Tony® award winning musical The Book of Mormon.

Lynn Nottage is a playwright and a screenwriter, and the first woman in history to win two Pulitzer Prizes for Drama. Her plays have been produced widely in the United States and throughout the world. Her works include Floyd’s, Sweat, Mlima's Tale, By the Way, Meet Vera Stark, Ruined, Intimate Apparel, Fabulation, or the Re-Education of Undine Crumbs from the Table of Joy, Las Meninas, Mud, River, Stone, Por’knockers and POOF!. Musical librettos include The Secret Life of Bees and MJ (upcoming). She has also developed This is Reading, a performance installation in Reading, Pennsylvania. Ms. Nottage is the recipient of a MacArthur "Genius Grant" Fellowship, among other awards, and is an Associate Professor at Columbia University School of the Arts.

Robyn Hurder is nominated for the Tony Award for Best Featured Actress in a Musical for her performance as Nini in Moulin Rouge! The Musical on Broadway. Her other Broadway credits include Nice Work If You Can Get It (Jeannie Muldoon), Grease (Marty), Chicago (Roxie u/s), The Wedding Singer (Holly u/s) and Chitty Chitty Bang Bang (Violet). She has appeared in the New York City Center Encores! productions of A Chorus Line (Cassie), The New Yorkers (Lola) and Paint Your Wagon (Cherry). Her touring credits include A Chorus Line (Cassie) and Starlight Express (Pearl). She has appeared regionally in Crazy for You (Polly) at the Drury Lane Theatre and Kiss Me, Kate (Lois Lane) at both Shakespeare Theatre Company and The 5th Avenue Theatre. She is the recipient of Helen Hayes and Emery Battis Awards, as well as a Gregory Award nomination.

ABOUT ERIC OSTROW
Eric Ostrow is proud to be the host and co-creator of the Live at The Lortel podcast series. Eric is a lover of stories and how theater artists in New York tell their tales. Starting off with the live interviews at the Lucille Lortel Theater to its current form, Eric is thrilled to curate and document these artists journeys and share them with students, audiences and other artists. Eric recognized a niche with the incredible theater artists in New York and became passionate about creating a space for these artists' stories to live on and be celebrated. Eric Ostrow trained in NYC and earned an MFA in acting/performance at the Mason Gross School of the Arts at Rutgers University.  He has worked Off-Broadway, regionally, in film, and voice-overs. Eric has taught and coached actors for film, television, and Broadway. Eric created and headed The Dramatics Department at NYC's Xavier High School and was on faculty at The Maggie Flanigan Studio. Eric recently hosted The Drama League Director Fest interviewing artists about their career for their students and alumni. Eric hopes these interviews inspire listeners to celebrate their own journeys.

Joy DeMichelle is an actress, storyteller, and self-healing practitioner. On stage her work has been seen across the country at South Coast Repertory, Mark Taper Forum, Actors Theatre of Louisville, Denver Center Theatre, Crossroads Theatre, Fountain Theatre, American Place Theatre, and various others. Joy’s screen appearances include but are not limited to: Snowfall, “For the People” (with Anna Deavere Smith), “Criminal Minds,” “Parenthood,” “Lie to Me” (with Tim Roth), American Gun (with Forest Whitaker), Taking Back Our Town (with the late Rudy Dee) to name a few. She received her MFA from Rutgers University, Mason Gross School of the Arts where she received the prestigious Bettenbender Award for Outstanding Performance and her BFA from North Carolina A & T State University. Joy’s is the founder of Heal & Create, a creative collective of Rutgers University - Mason Gross School of the Arts alumni, focused on diversity, equity, and inclusion. Joy’s deep calling to explore human behavior and the power of healing arts led her to create Bolster Your Joy™, for women + creative professionals to manage the stresses of life, re-write their stories and build a life of joy.

John-Andrew Morrison is a Lucille Lortel Award winning actor for his performance in the Pulitzer Prize winning musical A Strange Loop. In addition, John-Andrew along with the entire cast and creative team, won an OBIE Award for that production. In the same Off-Broadway season John-Andrew won an Outer Critics Circle Award for his performance in the Off-Broadway Premiere of Blues for an Alabama Sky with KEEN Company. John-Andrew’s work has been seen at theaters and cabaret venues around New York City including La Mama, Classical Theater of Harlem, Classic Stage Company, Joe’s Pub, 54 Below and more. Regionally his work has been seen at theaters including Hartford Stage, Baltimore Center Stage, La Jolla Playhouse, Cincinnati Playhouse in the Park and more. John-Andrew holds a BA in Theater Arts from Brandeis University and an MFA in Acting from UCSD. John-Andrew hails from Kingston, Jamaica and is a lecturer in musical theater at The Edna Manley College of the Visual and Performing Arts.

Daphne Rubin-Vega is a two-time Tony Award and Independent Spirit Award-nominated stage, film, and television actress and singer whose career has spanned three decades. A staple of the New York theatre community, Daphne rose to prominence when she starred in the original Broadway cast of Rent, garnering her a Tony Award nomination for Best Actress in a Musical and widespread critical acclaim. Daphne’s other Broadway credits include Anna in the Tropics, for which she earned her second Tony Award nomination, The Rocky Horror Show, Les Misérables, and A Streetcar Named Desire. Daphne’s Off-Broadway credits include Jack Goes Boating and Miss You Like Hell, for which she was nominated for a Drama Desk Award for Outstanding Actress in a Musical. Daphne can be seen in Netflix’ new anthology, Social Distance, and Peter Hedges The Same Storm, as well as Warner Brothers’ highly anticipated movie, In the Heights, the film adaptation of Lin-Manuel Miranda’s acclaimed musical.

ABOUT THE LUCILLE LORTEL THEATRE

Learn more and listen to the series at: