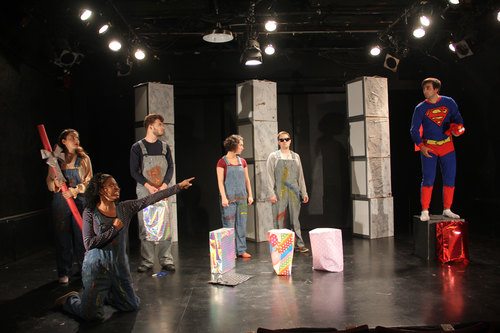 We talked to the playwrights and composers behind the shows selected for Fringe Encores, here's Brian Reno and Gabriel Vega Weissman, the playwrights behind Loose Canon.

No Williams! Brecht or Miller! How did you select what playwrights you'd be paying homage to?

We really started at the setting and worked backwards to find best the playwright to match. We wrote the Moliere piece first while eating in an IKEA. As we walked the aisles, we imagined how nicely the various Swedish furniture names would play in rhyming couplets. The idol worship of a Tickle Me Elmo and the intense feelings that course through a child's birthday party might work within a Greek chorus. And the phrase "Chekhov in Taco Bell" excited us enough to give it a go.

Having no Williams, Brecht or Miller however sent me home trying to imagine comedic vignettes inspired by their work. Were you interested in sparking this kind of effect in audience members?

Not immediately - this being our first play - we were just hoping people would laugh. But what you describe is a really exciting effect to have on an audience. Conversely, we love hearing people who don't necessarily know all the playwrights tell us they've looked them up and started reading their works.

What playwrights would you include in Loose Canon Part Deux?

We've talked about a couple different ideas. Brecht has definitely come up, so have O'Neill and Ibsen, but we would also want to pick playwrights who write in styles that would resonate such as Wilde's comedy of manners, Gilbert and Sullivan etc.

The audience for a show like Loose Canon has to be quite sophisticated or at least have a knowledge of theatre history. Were you concerned with having this alienate audiences?

As much as we appreciate those who appreciate the theatre in-jokes, we also hope that people will find the piece funny on more of a surface level. The situations, and how seriously the characters behave within the absurdity of the world they live in, give audience something to invest in and enjoy.

Can you talk about what elements you think are needed to make a play a classic, and also how was the process of paying homage to various playwrights while still allowing your voice come through in the show?

That's a tough question and as we were writing the plays - and as we watch them with audiences - we hope that audiences understand our respect and appreciation for the writers we're poking fun at. What the six plays in Loose Canon have in common with each other as well as their source plays is that the stakes are extremely high to the characters. Theres nothing easy about what they are going through even if we can acknowledge how ridiculous their behavior is.

I liked how in "The El Taqueria" not only did you make Chekhov hilarious and less depressing, but you also juxtaposed Hispanic and Russian cultures which seem to be worlds away from each other. Can you elaborate on how you made connections that start out seeming absurd but end up being quite thoughtful and moving?

For us, in Chekhov, there is constantly the question of authenticity. Who belongs in what class? Who can marry who? Who is pretending to be something they are not? There are constant facades being built by these characters to hide the reality of who they really are. Now to take a crazy leap forward, everything about fast food these days seems to be about authenticity: smoothies now with "real fruit," and milkshakes now with "actual ice cream." What the hell were they using before?! Everyone knows people in Mexico aren't eating Crunchy Nachos Supremes for dinner but we all still call it Mexican food - so in our play, "The El Taqueria" the family that runs the fictional Taco Bell in North Adams, MA fully invest in what they sell even if in reality there's no way they can take actual ownership of any of it.

I feel that Loose Canon should be used to teach theatre history because the classics are nothing if we don't allow ourselves to bring them down from the pedestal and play with them. Can you comment on whether you think theatre education is doing a good job when teaching the classics? How do you think young students would best take advantage of classics? Have you been approached by any high schools or colleges interested in the show as a didactic method?

We haven't been approached yet, though our team is really interested in getting as many NYC high school and college students to see the play in its run at Soho Playhouse as possible. The trick to the classics is making them approachable and not ancient or antiquated.

What do you think is the role of theatre criticism nowadays?

We believe the role of the critic is to exist outside the creative process and comment on his or her observations while understanding they are not members of the community. In the future we'll be able to trace trends in what they've seen in their career which can teach us about what ideas theatre artists may have been interested in. They shouldn't bear the responsibility of deciding whether or not a show succeeds or fails - but often they do.

Will the show undergo any changes before Encores?

We'll make some tweaks and changes based on what we've learned in it's run in the Fringe and at the Scranton Shakespeare Festival where it played in July.

Where does the show go next?

Right now that's up in the air but we're hoping it will at least generate some excitement in college theaters around the country!

For tickets and dates visit the Fringe Encores website.