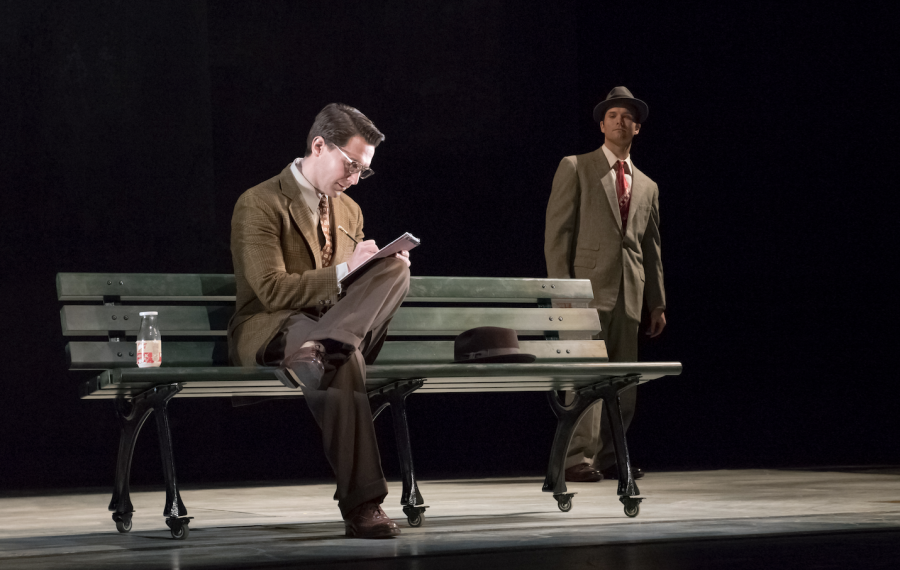 Fellow Travelers explores the romantic relationship between two men working for the US government in the midst of the Lavender Scare, an extension of Joseph McCarthy’s witch hunts that alleged that gay men could be blackmailed to avoid having their “persuasion” be revealed. Timothy Laughlin (Aaron Blake) is a shy writer, newly arrived to Washington who is unfamiliar with the machinations of DC, he falls in love with the charming Hawkins Fuller (Joseph Lattanzi) an ambitious State Department officer who seduces and then betrays him. In a way, it’s the quintessential operatic tragedy, but given its gay characters and modern setting, the work feels like a true revelation. Featuring a libretto by Greg Pierce, and music by Gregory Spears, the opera sheds light on the shameful history of gay rights in America, while being a masterwork that sweeps audiences off their feet. We spoke to composer Spears, who shared insight about his process, the themes of the opera, and his fascination with sounds from the past used in a modern setting.

Can you talk about your work dynamic with Greg Pierce? Do the words come first and then the music?

It was wonderful working with Greg, he’s such a calm soul which is great when you’re writing an opera. I love how playwrights think about drama, Greg sent me a draft and it felt like a wonderful challenge because so many operas have fantastical setpieces and this one was based on reality. Opera doesn’t always address every day themes, so addressing naturalistic stories is always a challenge. Composing I like trying things out before talking to the librettist, so with Greg I did a back and forth.

So if Greg is calm are you hyperactive?

(Laughs) I guess I mean in terms of being open minded. He’s a collaborator I really enjoyed working with, someone who comes up with ideas you actually wanna try.

One of the first words we hear in the opera are “Roy Cohn,” words which I find horrible to even say and which fill me with anger and dread, but in the opera they sound beautiful because of the musical notes. I’m fascinated by this dynamic. Do you find that making music out of things that scare you in life helps you deal with your fears?

When I think about setting a line I think about how the character would say it. Hawk Fuller, character who says “Roy Cohn,” is very complex, I don’t want to give too much away but he does some terrible stuff in the opera, and so I wondered how he would say it. So in that line “Roy” is sung and “Cohn” is half spoken, I was resisting lyricism to make it sound ordinary, plus they’re not talking about the man himself but about how to spell his name. Later on though, Hawk sings “did you shed a tear over Joe’s death?” and that one is very ironic. Music can do both.

You wrote your first piece of music in high school. How did you find opera as your outlet?

I wrote music through college, with a song here and there, and then I did a program called Composers & the Voice which is run by American Opera Projects, an extended workshop where composers write for singers in residency. Being in the room with the operatic voices I fell in love with what singers do. Every singer is their own instrument, so I loved writing for each person, and collaborating with them changed everything for me. I’ve always loved opera and being able to tell a story about the world we live in.

Are there singers you’d love to write for?

There are so many, so I’m afraid to single anyone out!

I was very touched by Hawk and Tim’s story. When you’re writing an opera do you ever think “perhaps someday Hawk and Tim will be like Mimi and Rodolfo”?

No, you have to be able to write your piece and that in itself can be intimidating to the point of paralysis. I try not to think about those pieces, I’d be overjoyed if the piece was done more. I think it’s a question of influence, for instance Tim and Hawk have a love duet, and I couldn’t think of any between two men in opera. So of course I thought about the tradition of how a love duet works, and that gets a twist in my piece.

Bizet, Verdi and Mozart never had to deal with recordings of their work, but in your case for instance Fellow Travelers is available on Spotify. Do you experience moments where you listen to your work and wish you’d change certain things?

I knew this piece would be recorded in Cincinnati, and this is where calmness isn’t a part of my personality, so I wanted to minimize that feeling as much as possible. Greg and I did a lot of fine tuning in hopes we would avoid that feeling. There are super tiny differences in what will be done at the Prototype Festival, a line for instance is now sung where before it was spoken. I’m very happy with the recording, it’s such a gift to have that for a new piece.

The first time I listened to your “Virginiana” cantata I was shocked to learn it was a new composition. Can you talk about the relationship between using old instruments and telling modern stories? It’s an interesting marriage because it makes me feel like you’re trying to tell a history of opera while looking to its future.

That’s interesting especially for American composers in the classical tradition, although I’m not sure what that even means. Growing up in Virginia Beach I listened to minimalism, Ravel, Stravinsky and pop music, so I always felt American composers weren’t part of the European classical tradition. I try to invoke the classical tradition through a minimalism DNA, so by having historical instruments used in a style that’s very much of this continent. I keep coming back to that and I don’t know why. There’s something about taking the ideas and not using them in the way they were supposed to be used. That paradox of seeing that European stuff with both feet firmly in this continent brings me back to that.

I loved the piece “Quite a View” from Fellow Travelers…

It’s funny, in the CD they put the first line as the name of the track, but we call it “the post office scene.”

I wondered from the songs in your oeuvre which would you most like to see being performed outside the opera?

That’s another impossible question. I don’t know I can pick one, one of my favorite things in opera is everything works together as a puzzle. That track you mentioned if you take it out I wonder if it would still work outside the piece, because it uses the same music from the “Bermuda” duet earlier, so they’re so entwined thematically that it would be hard for me to take something out. I do like Hawk’s aria, it’s so simple.