January 28, 2015
Theater Feature
Interview: The Creative Team Behind "Bonedive Scrounger" on Dive Bars, Burial Grounds, and 'Writing Nothing for Nobody' 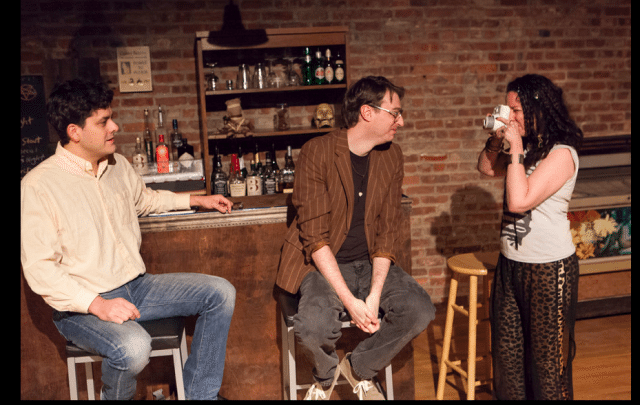 Bonedive Scrounger is a play set in a dive bar built on an ancient burial ground in which Jimmy’s always talking, Bronco writes nothing for nobody, Clementina can’t find her blind date, Annie’s capturing souls, and Bull’s claiming hats to mount on the wall. The show has reunited the creative team from Warm Enough for Swimming, Fred Backus and Maggie Cino, who are together again as playwright and director.

You’ve worked together in the past, specifically on Warm Enough for Swimming in the Fringe Festival in 2014, how does that experience compare to this one?

Fred: Well, we switched roles so that was interesting, now I get to hand my play off to Maggie in the same way she handed off her play to me.

Maggie: It’s definitely been an interesting process because both directing a play and writing a play are both really involved and creatively challenging but they’re very, very different. I think definitely when you’re producing your own works there’s a lot of letting go that you have to do. Even if you have a really great collaborator and a really strong process there’s a lot to be able to just step back and support the work that’s happening; and even if you’re able to have a strong voice there’s a lot that you just have to trust will happen in front of you. One of the beautiful things about directing a play is that you get to dive into a world that’s not your own and really make it come alive but at the same time you are much in service to the other artist in the process. I definitely found it interesting how different the experiences at each end were.

Fred: It’s watching someone else do something amazing with the work that you didn’t expect.

Is there one role (directing or writing) that you enjoy doing more than the other? Or that you feel more akin to?

Maggie: I think that we both have come to these art forms a little late. I started as an actor and was an actor for many, many, many years and probably about, I don’t know, about seven years ago started to explore playwriting as a primary art form; I’ve done a little bit of directing through the course of experience, it wasn’t something I ever pursued as a primary means of expression. I have found that writing is something I have gotten more and more committed to as the years go on and the opportunity to direct was a little intimidating, but I have found it to be a really wonderful time doing it and am grateful for the opportunity to realize how much I dig it.

Fred: We both started out as actors. We were both in the same writing group and both these plays were written around the same time and were sort of shelved for a while, and we were kind of like, 'How about you direct my play and I’ll direct your play?" And it just sort of come together this past year and it’s really great.

What's the transition from actor to playwright/director been like for you? Do you miss acting?

Fred: Well, I don’t miss acting in either of these two shows; I really enjoyed the cast we have and had and I enjoyed my job in the shows. But I certainly take all my acting experience into my jobs. When I directed Warm Enough for Swimming I was definitely an actor’s director I think. That was definitely where my strength was, was with the actors and that’s where my focus was on. And in writing this play I certainly wrote a play that would be actable as opposed to writing a treatise or a poetic or whatever; I really had in mind how it would be staged and how it would be acted. I feel that whatever my acting experience has brought has been poured into both of these projects.

Maggie: I think a lot of the most important playwrights through history have started out as actors; I think that acting is really the foundation discipline of all of theater. Standing on the stage and learning how to work through a story and getting it on its feet and knowing what it’s like to stand up there and put yourself out there is really important and having experience of that form and really helps with any other discipline you might practice, and the more I look around I realize that that path is well trod. It definitely makes you aware of the actors, it makes you talk to them, and it makes you think about storytelling in a different way. I couldn’t imagine playwriting without it although I know people do.

Fred: It’s good to be on the sidelines before you lead the troops I think.

That’s a great way of putting it. Onto the play itself: one of my favorite things about a show is to already have an actor in the space when you arrive. At the beginning of the show you’ve placed the character Jimmy in the bar space walking around and interacting with the objects on stage -- including the people who aren’t yet there. There’s already a question of if he’s crazy and who this guy is. Can you elaborate on this idea and where the concept came from?

We had a really unique and awesome opportunity to take full control of the theater and use it however we want, a lot of time. With the Fringe Festival, as awesome as it is, you’re sharing the space with other shows and have to pack everything up really tight, and this was such a cool opportunity to make the space our own. One of the things I felt really conscious of because I wanted to keep the concept of multiple realities all going at once, so you’re in a theater we are not pretending that, Jimmy gives the curtain speech, like this is a play. We aren’t creating an experience where you’re supposed to believe you’re just in the bar it’s a theater and a bar that exist at one time, at least that’s the experience I was hoping to communicate. And Brian was so on board, immediately after reading the play he came up to me and said Jimmy starts on stage right, like Jimmy has to start on stage and I said yes Jimmy has to start on stage. It was just a great collaborative process and we had so many artists who are passionate and want to grow themselves within the idea. 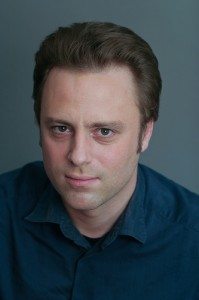 One of the things I was really interested in is this idea of "writing nothing for nobody" that the character Bronco talks about. Is there a certain place that the idea came from?

If you could hope for the audience to take away anything from this show what would it be and why?

Maggie: We had a lot of really intense conversations about the subject matter of the play and something I’m sensitive to ever since I agreed to work on this project is that what happens with Bronco and the pictures is something that is so devastating these days that it has ruined so many people’s lives that this impulse and action and it’s so serious. Even in the play and the setting it doesn’t have the same ramifications that it does today and it was something that as the director I was really struggling to wrap my head around like what is this about? Is it just this action without the consequences? But it really gave the opportunity to explore what the impulse is and even if you strip away the huge consequences that exist today in 2015 the impulse is just as damaging and there is so much about these pictures that are made public and there’s much less a conversation about how it’s not right to do this in the first place. The one thing I like about this is that we are talking about that and if people walk around thinking about that. I would love people to walk away with the experience of being transported and having multiple levels of reality and just having enjoyed it because I really enjoyed the time I spent in it.

Fred: Jumping off of that. I guess the mediation I’d like people to think about is when your experiences are solely for you and when they are a true interaction that is shared. That goes into when you go into a strange place and are you trying to mask things for your own book, edification or self, or are you trying to interact with the people who are already there and have a true relationship. That was sort of my launching into this play and what I’d like people to think about I guess.

Bonedive Scrounger is playing from January 22nd-January 31st at the Brick. To purchase tickets or for more information go to www.bricktheater.com.

Kelli Kardell is an intern at StageBuddy while attending school to earn her degree in theater and journalism. Among her writing interest she also pursues photography and a theatrical life. For more information please see www.kardelltheatrics.com.