April 13, 2016
Theater Feature
Interview: Playwright Morgan Stevenson on “If We Don’t Get It, Shut It Down – A Play About the Baltimore Uprising” 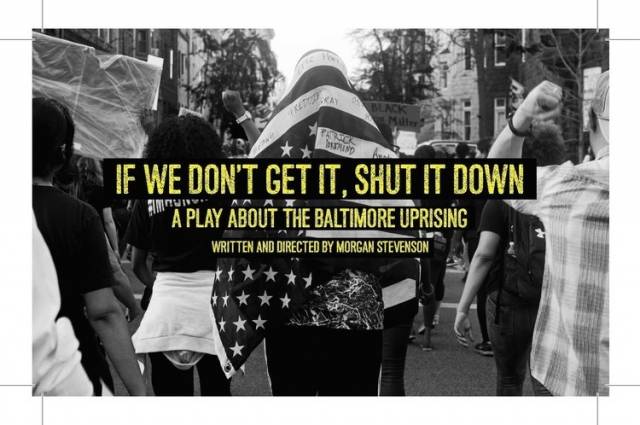 StageBuddy recently had the opportunity to interview Morgan Stevenson, the writer and director of If We Don’t Get It, Shut It Down – A Play About the Baltimore Uprising, a piece of documentary theater with the vast majority of the dialogue and situations coming directly from interviews with activists and other residents of Baltimore.  The piece addresses issues of race, class and police brutality – particularly as they relate to the Baltimore uprising that occurred as a result of the death of Freddie Gray in April of 2015 -- and will premiere on Friday, April 22nd at the Harlem Repertory Theater.

What made you want to write about this subject?  Do you have a connection to the city of Baltimore?

As an undergraduate student at Lang [The New School's Eugene Lang College] studying Theater and Urban Studies, I chose to pursue this project as my senior thesis because I thought it was important me to use my privilege as a scholar and a theater artist to amplify the voices of demographics of people who are marginalized within mainstream society, more specifically urban youth of color. I was personally connected to this project because I was born and raised in Baltimore and was a youth activist my entire life there until moving to New York City to attend Lang. As the events of the uprising transpired last April, I was unable to immediately return home to Baltimore to support my friends and family. Many of whom put themselves on the front lines every day of the movement and were arrested and/or threatened by law enforcement. As I was removed from the situation, and many of my contacts were unable to be reached immediately in the moment, I had to rely on social and mainstream media in order to get the story. However, after talking to loved ones, I saw that the reports on the news were extremely inaccurate and biased in order to depict protesters as violent and as criminals. I was disgusted by this criminalization of the youth by the media and by city officials as it has been an ongoing issue in Baltimore and I often felt like I was also subjected to that type of state violence during my public school education.

The construct of this play appears similar to Anna Deavere Smith’s documentary theater – such as Fires in the Mirror and Twilight.  Most of the dialogue in these pieces were taken from interviews.  Is there any added or invented dialogue here or is all the language verbatim from the interviewees?

The play is mostly from verbatim interviews, however, there are a few scenes that are devised, meaning they are improvised based on devices given from the director. In Scene 5, a multimedia clip is used to frame the entire scene. It is news footage that reports on the arrest of Freddie Gray and how it resulted in his death. The news footage is the first device, it establishes context for further improvised dialogue. The next two devices are prompting phrases that I assigned to all of the actors. Each actor, when improvising dialogue and conversations with each other must start their improvised line with the same phrase so that there is continuity, it then creates a nice rhythm and allows the scene to not fall stagnant as the prompting phrase should have more impact the more it is spoken. Similarly, in another scene, I open up room for the actors to improvise more dialogue. During the height of one of the protest scenes, the actors participate in a standoff and open dialogue with a police presence that is off stage. In this moment the actors are given a little more autonomy to say whatever they want to the police presence in the way that they see as fitting to their character. The intention behind these improvised scenes was so that the actors could internalize the stories of the interview subjects that they are portraying. It also allows them to perform with more authenticity when they are able to accurately portray these people in their own words. Ultimately, this was a strategy I employed to humanize the characters even more. 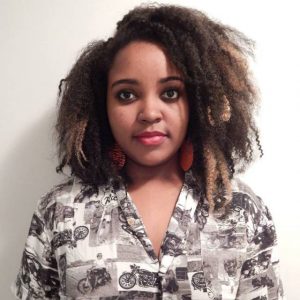 What is your experience as a playwright prior to If We Don’t Get It, Shut It Down?  How was the experience of writing this piece different from other writing you have done?

I always have difficulty calling myself the playwright of this piece, because the stories within this play are not my stories. As the playwright, my biggest role has been being an active listener during the interviews I conducted and knowing what types of questions I should be asking in order to get a nice range of information to choose from to create this story. This playwriting process has been a lot different from previous plays that I have written in a more naturalist structure where I could really make my creative voice known. But in this piece, I have enjoyed collecting people's stories and finding strategies for presenting them in the most authentic way possible. I have used my medium and platform to advocate for a marginalized group of people while recognizing my own privilege as a working artist and soon to be college graduate living in post-gentrified New York City. This experience has shown me that if I'm not willing to amplify the voices of other people through my art then I'm not really doing anything productive. The idea of playwriting has shifted for me in that I see myself more as a story curator who has the ability to take pre-existing information and write it in a format that is ready to be performed and viewed by people who normally would not have been a part of the conversations I had with interview subjects.

You brought the cast of the play to Baltimore to meet the people they will be portraying.  How do you think this experience shaped the way the actors have approached their roles?

I saw the Baltimore trip as being the most useful component in the rehearsal and character development process. During the trip, the cast was really excited to just be able to see the places that they had been talking about in rehearsal for about a month. It meant something more to them to physically be in the space. When we arrived, immediately we were welcomed by members of my family and community in West Baltimore, where I am from. The cast was kind of just thrown into the middle of an organizational meeting that was taking place at my mother's house. Immediately they could sense that there was so much work still being done in Baltimore, because the uprising did not resolve many of the issues that have plagued Baltimore for decades. This gave them a larger sense of urgency and they could see how this play would be released at a very sensitive time, the one year anniversary of Gray's death. I organized a social gathering for the cast to meet interview subjects, at this gathering, they were able to meet approximately half of the interview subjects and participate in meaningful dialogue. Going into this activity, I wanted to frame the discussion with questions that I had pre-planned, but my interview subjects just began to introduce themselves to the entire cast and an organic conversation was able to take place. It was interesting to see where the cast connected to the interview subjects in terms of personal connections or being able to relate to the experiences, aspirations and sentiments that they all had in common. I believe that this experience allowed them to internalize the narratives of the characters in the play, it also motivated them to honor these stories by staying commuted to the characters in a way that they hadn't done before. I believe this trip also allowed us to create a network of artists and activists who all want to see the end of what our current militarized police force looks like and how it has in some way impacted all of us. At the end of this trip, the cast walked away with a better understanding of what they needed to do to be true advocates for the interview subjects and for all other people who are negatively impacted by systemic racism and police brutality.

The full title of the play is If We Don’t Get It, Shut It Down – A Play About the Baltimore Uprising.  Why did you decide to use the word “uprising,” and how is it different from other words that could have been used – like “protest” or “riot?”

In writing this play, I chose the word “uprising” in the subtitle because I felt that other words could not accurately label this event. Still to this day, I take some issue with using the word “uprising,” because in a historical context, the word suggests that there was a political shift to occur as a result of planned demonstrations and extensive periods of social action and civic engagement. However, there has been very little political reform in Baltimore following the uprising. Police and community relations have not been mended, city officials still criminalize the city's youth and resources are still scarce. Despite the period of social action that was highly publicized, the level of civic engagement in Baltimore during that period is significantly smaller, and only a few grassroots organizations have continued the work that they have been doing. So in essence, I feel like the conditions in Baltimore are still pretty much the same, even though there are some hard working organizations out there. I would say the word uprising was more accurate than the words riot and protest for multiple reasons. I take issue with the word "riot" because it has a connotation of being irrational, inherently violent or being reactionary. That was not the case with the Baltimore Uprising. People in Baltimore, like many other cities in the United States have grown tired of poverty, systemic racism and oppression and police brutality. We have grown tired of mourning the loss of another person in our community who was murdered by the police. The response that was shown on television was not irrational, it was not violent, it was not reactionary. People were displaying how outraged they were that another incident like this happened. People were showing others who were unaware that this is still a problem that Black and Brown people are facing. Even when people were burning down businesses and/or looting them, this act itself was also highly strategic. For example, the CVS that burned down was misrepresented in mainstream media. Many of the news reports focused on how this was the only pharmacy in that community without shedding light on the root issue in that community. The reports did not talk about how healthcare is inaccessible or how the owners of the CVS have had terrible relationships with the patrons and residents of that community. They did not report on how that business has had a history of discriminating against people in that community. Essentially, all of the action, in my opinion was well thought out and then enacted on. Label these events as just a riot or protest diminishes the fact that this was an opportunity for some of the most oppressed peoples to finally be heard.

"If We Don't Get It, Shut It Down" will be performed April 22-23 at the Harlem Repertory Theater.