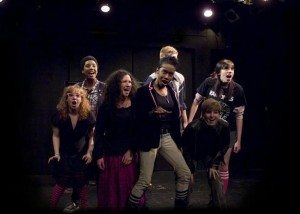 (The writer and director of Lesbian Love Octagon gave us a short interview about the musical, being a lesbian in the 90s, and the role of social media in the theater world.)

Lesbian Love Octagon is a musical about a heartbroken lesbian, Sue, who loses her girlfriend to an ex-girlfriend. Her friends proceed to try and help her get over the breakup, leading to hilarious drama. The whole thing is set in the Lower East Side in the late 90s, a time when being a lesbian was a little different than it is today. Kim Kressal, the director and writer of the book and lyrics of the musical, drew inspiration from her own life as a lesbian in the late 90s and the world she experienced pre-9/11.
Kressal journals in song. After 9/11, she moved back home to Florida for a little while. When she was down there, she would journal these lyrics and send them back to her friends. She told us during a phone interview that she had wanted to turn them into a larger story. Three years after moving to Florida, she met up with composer and contributing lyricist, Will Larche, to try and flesh out the story.
The story itself almost creates a new genre of musical for the New York theater scene scene. Granted, the topic of homosexual relationships in Manhattan been dealt with before (think RENT), but, unlike RENT, which has more of a focus on AIDS, poverty, relationships in general, etc., this musical is really focusing on lesbians in the late 90s.
Kressal said that because they were creating this new genre of musical, they wanted to throw something familiar into the mix. “The music has a Broadway sound, something traditional Broadway.” This was to balance out the originality of the themes and offer the viewers something familiar.
Kressal, in other interviews, has admitted that the world of her characters in the musical is very different from the world of post-9/11 lesbians. I asked her about this and whether or not viewers today can find anything in common with these characters. She assured me that the characters and their struggles are still very approachable and relatable to the viewers. “There are larger themes to the show that people can connect to,” she said. She added that the world of lesbian culture in the late 90s was just a great kindling that gave her a window to explore larger themes of identity, love, etc.
Apart from the main website for the musical, they have also maintained a blog. The blog features interviews with cast members, little sound bites, updates on ticket sales and behind the scenes information. It’s a great way for fans of the musical to connect to the people behind it. With this in mind, I asked about the role of social media in marketing the musical. She says it’s been invaluable. They’ve used it to reach out to their audience and to raise awareness about the musical. It helped them gain new audiences and reach out to people who might otherwise not have heard about it. “This is the direction that theater has to be going,” Kressal commented.
What started as Kressal’s thoughts jotted in lyrics has become a musical about identity, love, and being a lesbian in the late 90s. The musical opens in June at the Kraine Theater, and tickets are on sale now.