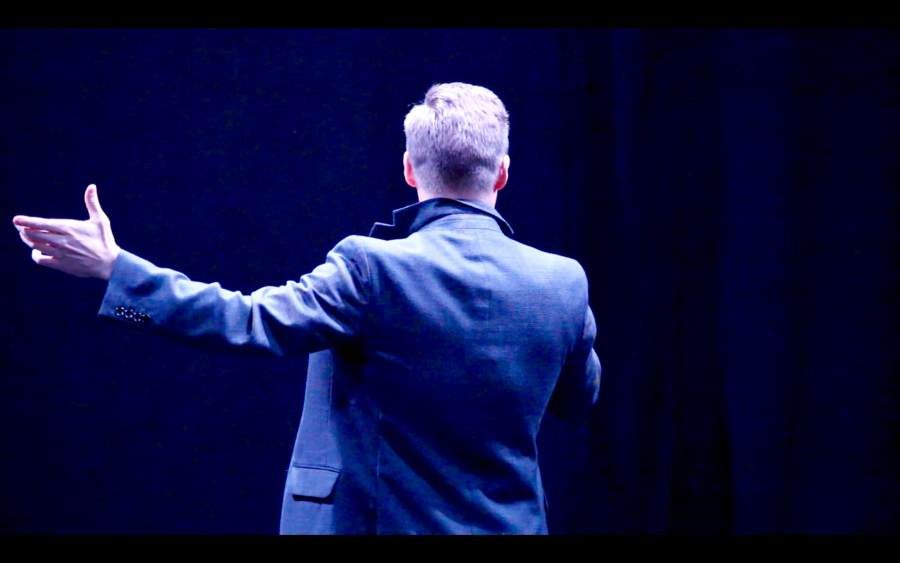 About ten years ago, Brandon Burk was a popular fixture on the Las Vegas Strip performing in Tony & Tina's Wedding. One night after a show, he got behind the wheel after drinking many strong cocktails, drove the wrong way down Nevada's I-95 freeway, and collided with another driver, Stephen Tomlin, which resulted in Tomlin's death.

On February 2, 2018  the story of that night's events and Burk's journey toward redemption comes to the New York stage in the play Invention. Produced by Brandon Burk and Heather Anne Chamberlain of Sugar Shack Productions and co-written by Ed Simpson, recipient of the L.A. Drama Critics Circle Award and a forty-year veteran of theatre and film, the play stands out as one of the most touching pieces of theatre to grace New York City this season. Under the direction of New Light Theatre's Artistic Director, Sarah Norris, Invention, a one-man show, unfolds as a raw, tender, humorous and deeply poetic story that has every chance of changing lives.

We sat down with the creators of Invention to talk about the birth and conception of Invention and why the theatre is the place to tell this story.

What scares and thrills you about sharing this story with the world?

Brandon Burk: It all both scares and thrills me, to be honest.  But I think one trap of writing an autobiographical piece is always making yourself the good guy.  Ed was really great about keeping me from doing this.  He forced me to take the scarier path and show sides of myself that are not ideal.  Putting these parts of me in front of an audience was the scariest part.  The more I get to tell this story, though, the more I realize how many people relate to those parts of me, and how many people have felt the same way.  It’s thrilling to me, now, to relate to people that way about things people don’t usually express freely.

Ed, what about this project attracted you to co-write it, thus lending your esteemed credibility to it and to Burk?

Ed Simpson: I guess it was the story of Brandon’s search for redemption, for re-birth.  His journey to become a better man, to not just survive prison but to use the time “away” to recreate himself, just spoke to me.

Brandon is a former student of mine and we were in touch while he was in prison. And what really impressed me about his letters was the fact that he never complained about prison– not once.  He took responsibility for his actions. He said, “I took a life and I can never pay it back – but I’m going to spend the rest of my life trying.”  That was beautiful.

So at one point I said I thought there was a story here that needed to be told and that, once he got out of prison, and here we are.

As a prolific theatre director, what were the challenges of directing Invention, a one-man show given that the actor, Brandon, is both the playwright, performer and the person to whom the events happened?

Sarah Norris: It is extremely important to create a safe environment during the process, and given the subject matter of this play, I was acutely sensitive to that. I’ve told Brandon on a couple of occasions that writing (to me) is the scariest artform in the theater. It is so personal! Writers are so brave! His journey navigating through some of the darkest points in his life is beautifully written, painful to realize, and full of humor and hope. My focus has been to observe his performance and provide an honest response that I hope honors his intent with the play.

Brandon, as a new transplant in NYC by way of The Utah Shakespeare Festival as well as long stints as a performer on the Las Vegas Strip. What discoveries about the NYC theatre scene surprised you?

Brandon: I’m learning as I go, I guess.  But perhaps what has surprised me the most so far is how similar the theatre world is here to the places I’ve produced and worked before.  I feel extremely comfortable here – more so than I expected to.  And I’m finding that there really aren’t that many surprises.  The theatre community is the theatre community wherever you go. I will admit, though, that the overall quality here definitely has a higher bar – which is NOT a surprise, just a confirmation.

Ed, other than Invention what types of stories do you like to tell?

Ed: I think stories that try to illuminate and celebrate humanity with all it’s wonderful, complex sloppiness.  I’m interested in people and the things that we have in common – love, loss, loneliness, compassion – all the things we do to try to make sense of it all.

I always liked this quote from the LA Times about my play Additional Particulars because it kind of summed up my approach to writing my plays…if I were smart enough to define my work this way! “Human comedy par excellence, as if Chekhov were reincarnated in America’s Wal-Mart culture…. Simpson’s sympathy and affection for his character’s weaknesses are signs of that rare combination of humanist with a genuine sense of humor.”

Sarah, as a director, why tell a story in the theatre and not television or film?

Sarah: The audience. There is nothing better in this world than experiencing a story with another group of people. The energy from the audience to the performers onstage is palpable and affects the work in such an interesting way. It can be subtle, it can be obvious, but it is always something and that to me is the most thrilling part of live theater.

What do you think is missing, if anything, in the American theatre?

Brandon: I’d like to see more of myself in the American theatre! But in all seriousness, if we don’t encourage more young people to get out from behind their Netflix accounts and into the theatre, the audience slowly dies off. What's missing is theatre education – exposing youth to theatre in schools and in their communities.  For many, once they see it, they’re hooked – that’s how it was for me.  But so many young people don’t even have the chance now.

Ed: I always wanted to be an astronaut so, maybe that.

Review of ‘Dress of Fire’
Year in Review: The Theater We Loved in 2017
Interview: Director Leyma López and Actress Zulema...
Interview: Ralph Lewis on Directing ‘Androbo...