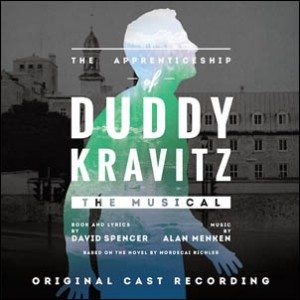 “A man without land is nobody.” Such is the maxim, learned from his grandfather, that Duddy Kravitz (Ken James Stewart) uses to rule and guide his ambitions. Of course, to acquire the land, he first needs to acquire the money, and as his desperation to become somebody only increases with time, he seems to become willing to go further and further to make his dreams a reality. But how far can he go before he loses everything else?

This is the question at the heart of Alan Menken and David Spencer's The Apprenticeship of Duddy Kravitz, whose original cast recording will be released December 2 by Ghostlight Records. Playing Duddy’s father, Max, George Masswohl narrates and unites the album, keeping the show’s principle moral concerns at the forefront, while infusing the story with his unique perspective and a quirky voice that heightens Duddy Kravitz's charming world. Max's affectionate but nonetheless judgy view of his son’s business tactics is half the fun. As he says in the soundtrack’s opening lines, “Even as a kid, way back there before he had begun to make his mark, my boy was a troublemaker.”

As the titular troublemaker, Ken James Stewart shines as much as his character wishes to, capturing the charm of the musical without shrinking away from the shadier aspects of Duddy’s approach to his budding business endeavors. Leading a musical as an at times thoroughly unlikeable character has its challenges, but Stewart helms the balance well, allowing the complexities of the story’s moral explorations to flourish. His ambitions shine through in the first act’s “I’m Gonna Buy This Lake.” Sharing the song with Marie-Pierre de Brienne, who plays his love interest, Yvette, Stewart brilliantly captures the eureka moment of the album, his rich voice playing up the serendipitous hopefulness of the song. It’s not every day that you stumble upon the perfect place to build your life’s ambitions the morning after a loving tryst, and this song grounds those ambitions perfectly into Duddy’s grand scheme for his life, which involves centering Yvette and his grandfather, who inspired him to find land in the first place, in his plans.

The hopefulness of the first act makes the shady business deals of the second all the more tragic, as an increasingly desperate Duddy grasps to get the money for the lakeside property. If “I’m Gonna Buy This Lake” is the hopeful relief of the first act, “The Final Hustle” is its disillusionment, as Duddy repeats “I’m gonna buy that lake” in a callback to the optimism of the first act, all while screwing over everyone he’s met along the way. Cleverly undercutting the anticipation of Stewart’s earlier innocence and charm, Menken and Spencer give Duddy what they want, but deny the audience the satisfaction that should come with seeing the protagonist get what he wants.

This is the principle challenge of The Apprenticeship of Duddy Kravitz, as it calls upon us to consider the ethics of the protagonist’s actions even as it encourages us to root for Duddy. Given that the “I Want” song is a staple of musical theater structure, an overly ambitious protagonist is hardly new fare for a cast recording, but the examination of the underlying ethics gives the musical’s “I’ll be somebody” reprise a fresh twist. At times heavy-handed in its discussion of morality, The Apprenticeship of Duddy Kravitz nevertheless strikes an excellent balance between rooting for its protagonist’s success and shrinking from his methods, setting up its moral theme and developing a story.

Part of the wonder of that story comes from the charm of Duddy’s world. Though surrounded by shady dealers, which Duddy ultimately joins, there’s an inherent innocence and loveliness from the first act Duddy who seeks to make his grandfather proud by finding “a site to set a farm” for him, and doesn’t recognize heroin when he sees it. As his character strays from this charm with his sketchier business decisions in the second act, the listener yearns for Stewart to return to the purer ambitions he previously established, and which the cast recording does an excellent job preserving in the end. It’s only aided in this goal by the accompanying digital booklet, which includes a summary of the musical cleverly written in Max’s voice. Uniting the otherwise disjointed musical numbers with the story, Max’s voice keeps us grounded in Duddy’s simultaneously lying and lovely world.

If Duddy is the unlikeable protagonist helming the story, then Yvette brings the loveliness, her beautiful voice also serving as Duddy’s voice of reason in his moments of greater ambition, as in “I’m Gonna Buy This Lake.” De Brienne’s first song, “How Could I Not?” gives Duddy the recognition and admiration that he’s always craved from his family at last. Of course, a good opinion is not enough – he’s nothing without the land, or so his grandfather says. But de Brienne becomes Duddy’s saving grace nonetheless with “Welcome Home,” their final duet, as she tries to bring him to his lake, giving him the opportunity to leave his blind ambitions behind to become a better man. It’s the standout song that brings the moral of the story home, literally, by reminding us that the real value of the property is as a home.

The Apprenticeship of Duddy Kravitz will be released December 2 by Ghostlight Records. To order, visit sh-k-boom.com/duddykravitz