White water boating down the Grand Canyon sounds like a sensational summer trip, not a theatrical outing. However, ACT’s production of Men On Boats by Jaclyn Backhaus, stages the wilderness West of the 1860's. Specifically John Wesley Powell’s 1869 boat exploration of the Green and Colorado Rivers, culminating in a harrowing, multi-week trip through that great geological feature. Backhaus fashioned a 95 minute comedic odyssey, with Powell’s ten-man crew played all by women. Under Tamilla Woodard’s direction at the Strand Theatre, we watch the woman explorers crash down the river, battling not just the elements, but themselves as well, a sometimes-ragged team of Civil War veterans, mountain men, and two with no experience at all.

Powell’s extensive journal of their voyage provides the grist for Backhaus’s rollicking take on ten individualists, four boats and the molding of a myth. Powell, the one-armed leader of the expedition, as played by Liz Sklar, clearly sees himself as authoring an epic adventure, and while genial, brooks no challenge to her authority. The cast plays out as the pre-eminent strength of the production; all ten actors are excellent individually and as an ensemble. The white-river segments, plunging down rapids and waterfalls thrill the audience as the actors scream, and the audience winces. And since women will be women turf wars will erupt, food will be coveted, and whiskey will be consumed. Sarita Ocón as the doughty mountain man William Dunn, Katherine Romans as Bradley, an in-experience nineteen-year-old, and Amy Lizardo as the prickly camp cook deserve particular mention, but again, the entire cast is fantastic.

The format of a journal facilitates narration, while Backhaus’ dialogue provides laughs and, by inverting gender, a male free environment in the wilds to imagine that big if—what if women had decided to head out on their own to explore the Colorado? One episode provides a key insight into the mindset of the play, and into a missed opportunity. Starving, almost out of food, three team members trek up a side-canyon to contact the local Native Americans for food. The natives, benign and amused, offer them generous amounts of fresh vegetables, offering them also a neighboring Mormon farmer’s rotting field. Tsauwiat and the Bishop are portrayed as the kindly stewards of the land, the intrusion of these white women a momentary diversion. But the playwright chooses to ignore the fact that Powell’s work as the Director of Ethnography at the Smithsonian inscribed deeply racist attitudes towards into our nation’s official policy towards the original Americans. Though he, his fellow adventurers, and most white Americans conceived of  Native Americans as “savages” or “barbarians,” this side of Powell is elided in the script. If the playwright’s intent was to take the “man” out of Manifest Destiny, she should have considered that women played roles in this aspect of American history as well.

Still, the production itself stands out, despite the script’s glaring omission. Sure, women could have been the first to descend the Canyon had they not been second-class citizens.  And Men On Boats provides an enjoyable evening, as well as a missed opportunity: it wasn’t all fun and games in the exploration of the West. 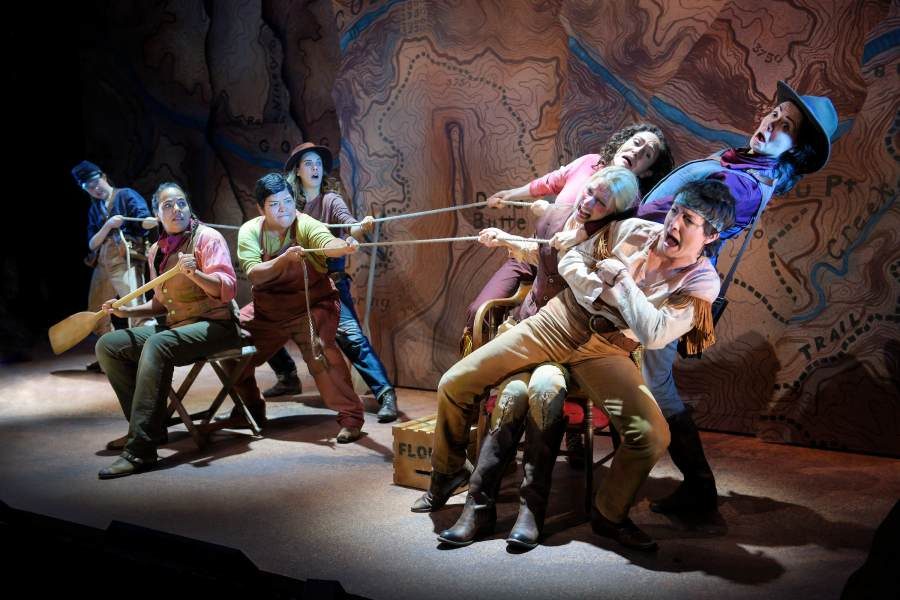 Review: Cirque du Soleil – Volta
Review: ACT’s Stunning Seascape: Life’...
Review of ‘A Walk on the Moon’
Review of ‘A Lesson From Aloes’