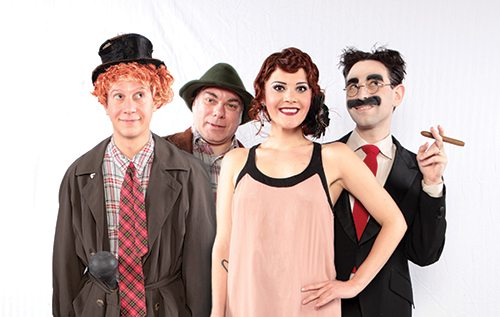 In the mid-1920’s the Marx Brothers were perhaps the most celebrated entertainers in the United States, after a successful career in vaudeville they transitioned to Broadway where they continued making people laugh with their combination of surreal, over-the-top humor and utter lack of self-consciousness. The siblings became so iconic, that theories about the meaning of their work range from the purely aesthetical, to those who suggest that each brother represented a part of the psychic apparatus as defined by Sigmund Freud. Their eventual move to Hollywood turned them into bona fide legends who have gone on to influence the work of artists like Woody Allen.

In more than one way, the Marx Brothers were certainly ahead of their times and one of their most significant collaborations to entertainment was that they were one of the first artists who made Broadway accessible to worldwide audiences. By turning their successful shows into motion pictures, the brothers were bringing New York to the whole world, in the process helping shape the myth of the city’s magic. All of the Marx Broadway shows were transferred onto the screen, except for one called I’ll Say She Is. In fact the 1924 revue had never been put onstage again, until the production currently seen at the FringeNYC Festival.

One of the boldest, gutsiest, most delirious productions that have graced the New York stage in recent years, I’ll Say She Is feels like more than stepping into a time machine all the way back to 1924, it feels like a celebration of the undeniable fact that they truly don’t make them like they used to. A motley crew of talented actors step into the huge shoes of Groucho (Noah Diamond), Harpo (Seth Shelden), Chico (Robert Pinnock) and Zeppo (Aristotle Stamat) and not only do they come unscathed, but their performances are so flawless that you might have to pinch yourself to remember this is the year 2014. Damond is splendid as the larger than life Groucho, perfecting the voice, diction, impeccable timing and his ability to make you feel as if he knows what you look like under your clothes with a mere smirk. Shelden’s Harpo is wonderfully alive and steals the show with his precocious-child gags.

There isn’t much of a plot, other than the fact that there is a girl (Melody Jane) in search of “thrills”, which the brothers are more than willing to provide. There’s also the girl’s uptight Aunt (the divine Kathy Biehl), a butler (C.L. Weatherstone) and a delicious chorus of showgirls who play everything from clouds to Wall Street passersby. There are scenes involving Napoleon Bonaparte, a Fairy, and an opium den in Chinatown, but the less you know the better, not that it would make much of a difference since the magic of the show is in the line delivery and energy. This is one of those shows where you feel like, more than with any other one, no performance will be like the previous one. The Marx Brothers were famous for their snappy improvisational skills and there is much of that charm in this revival. During the performance reviewed here, there was an incident with a cigar box that provoked thunderous laughter and it was managed so wonderfully by the actors onstage that it’s almost impossible to guess whether it was in the script or not.

Theater rarely feels as full of life as I’ll Say She Is. The Fringe run is already sold out, and one can do nothing but hope, pray and wish that a smart producer out there will attend the show and put the Marx Brothers back on Broadway where they belong and have been sorely missed.

I'll Say She Is continues its run at The Sheen Center through August 22 as part of the New York International Fringe Festival. For more on FringeNYC shows, click here.

Through August 22 at The Sheen Center.