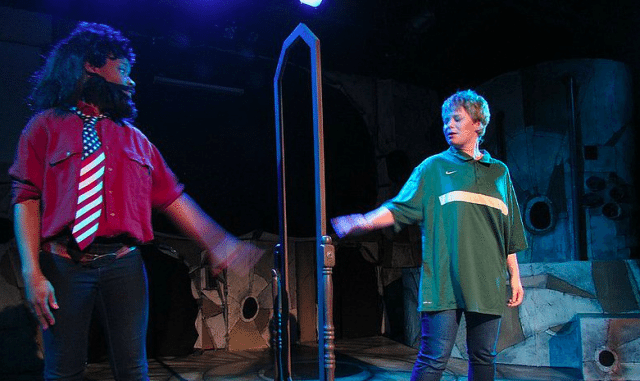 Based on the brilliant cult documentary of the same name, King of Kong is a charming musical parody in which two performers (Amber Ruffin & Lauren Van Kurin who also wrote the show) play unlikely rivals Billy Mitchell and Steve Wiebe respectively. Mitchell holds the world record for highest score in the popular arcade game Donkey Kong, and Wiebe plans to challenge him and beat him. As it stands, the premise itself seems to be the thing only parodies can be made of, but at the heart of the matter there is a touching, bittersweet story about the ridiculousness of the American dream and the shallow standards some people set for themselves.

“Never give up until your set of circumstances forces you to give up” explains Wiebe to his son, and this could very well sum up the overall tone of the show, it’s about losers who somehow manage to come on top through sheer luck. Energetically directed by Brendan Hunt, the show flies by and makes for a fun experience. The songs are upbeat, the lyrics are funny without being mean, and best of all, you leave the theater wanting to seek the documentary and learn more about the story.

King of Kong: A Musical Parody continues its run at the Players Theatre through August 19 as part of the New York International Fringe Festival. For more on FringeNYC shows, click here.

Through August 19 at the Players Theatre.