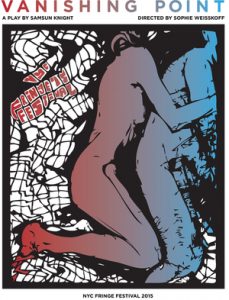 The setup of Samsun Knight’s Vanishing Point, part of the New York International Fringe Festival, is fairly straightforward: Gene (Chris Morriss) is having an affair with Maria (Sarin West), and when his dying wife Diane (Jessica Asch) discovers his infidelity, she promises to make their breakup quick and easy as long as she can meet the so-called “other woman.” While this situation lays the foundation for a tense dramatic conclusion, the play is more about character investigations and philosophical wanderings than it is about dramatic flair.

In fact, the dialogue often avoids any sort of emotional honesty – to a fault. Vanishing Point is rife with long-winded self-involved characters who are prone to long, distracting asides about a number of intellectualisms. Gene is obsessed with gender-specific sexual motivations. Jessica retells ancient Greek tales and relates them to her own existence. And Maria is fascinated with the human impulse to take pleasure in the pain of others – a particularly appropriate interest given the dynamic she adds.

Luckily, the actors mostly seem to recognize that the most potentially powerful moments in the play occur in the tiny spaces between speeches. Sarin West in particular takes advantage of the pauses and the glimpses of emotional honesty she is allowed (or maybe that she allows herself). At one point, after an extended sequence of bickering about daddy’s girls and dominant males, she has the time to breathe and asks Gene if he’s planning on leaving his wife. For obvious reasons, we shouldn’t be on Maria’s side. But West’s interpretation is such a beautifully true mix of strength and vulnerability that we half want her to take this married man from his partner.

Director Sophie Weisskoff stages a lively production here, one full of interesting blocking that complements the winding, verbose dialogue. Ultimately, though, Vanishing Point could have benefited by including more of the rare vulnerability that its characters only occasionally reveal to us.