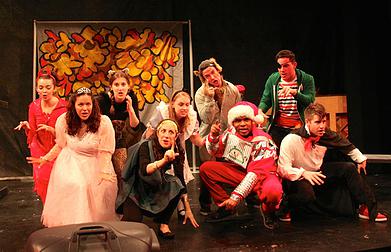 Vestments of the Gods should have been made as a stop motion film in the vein of The Nightmare Before Christmas and Paranorman and this is nothing if not a compliment; for the way in which Owen Panettieri’s sophisticated musical combines the macabre with a touching, politically conscious coming-of-age story is rarely seen on the stage and has usually been relegated to the strangely beautiful works of film artists like Tim Burton, and Roald Dahl in literature.

Set during Halloween, the show unfolds in a school where the students have gathered for what is meant to be a joyous assembly, only to have their event threatened by the too-bold costume choice of Hayden (Sean Bennett Geoghan) one of their fellow classmates who shows up dressed like “Fabulous Jesus”, sending the more conservative kids down a cruel path that has them calling him names and bullying him for what they believe to be his potential homosexuality. Only Hayden’s friend Annie (Erica Diaz) comes to the rescue by declaring she too is dressed like a religious figure: the Prophet Muhammad.

Annie is sent to the Principal (a touching Scott Schafer) where the two go into a debate about what is right and wrong when it comes to being offensive. But Annie, too inquisitive and clever for her years, discovers that all kinds of injustices are committed in the name of rules and ethics, sending her down a path of self-awareness that can only lead to tragedy. Splendidly directed by Joey Brenneman, Vestments of the Gods is a show that almost feels too good not to be already playing at least off-Broadway. Its ideas are bold, its execution is precise and beautifully cruel at times and the performances are masterful.

Diaz makes for an endlessly likable heroine, think of her as Erin Brockovich in middle school, all spunk and idealism, while Geoghan turns in a subdued turn as the bullied Hayden. He will break your heart. Best in show might very well be Jennifer Cody as PTA watchdog/she-devil Vera Harper, who shows up to wreak havoc with her ultra conservative agenda, think of her as Sarah Palin in a Queen of Hearts costume (that enough should suffice to give you endless nightmares), while Harper can be easily accused of insanity and many other terrible things, it’s great to see Cody empathize with her so much to the point where you realize that Vera, just like a child, can’t tell the difference between right and wrong.

And this is where Vestments of the Gods punches you right in the gut; it reminds us that our sociopolitical upbringing has everything to do with who we become. While the show could have been moralistic, it presents us instead with a balanced assessment, it condemns bigotry but doesn’t pretend to have an answer for how to fix it either, making for one of the smartest recent theatrical productions. Life after all is rarely child’s play.

Vestments of the Gods continues its run through August 24 as part of the New York International Fringe Festival. For more on FringeNYC shows, click here.