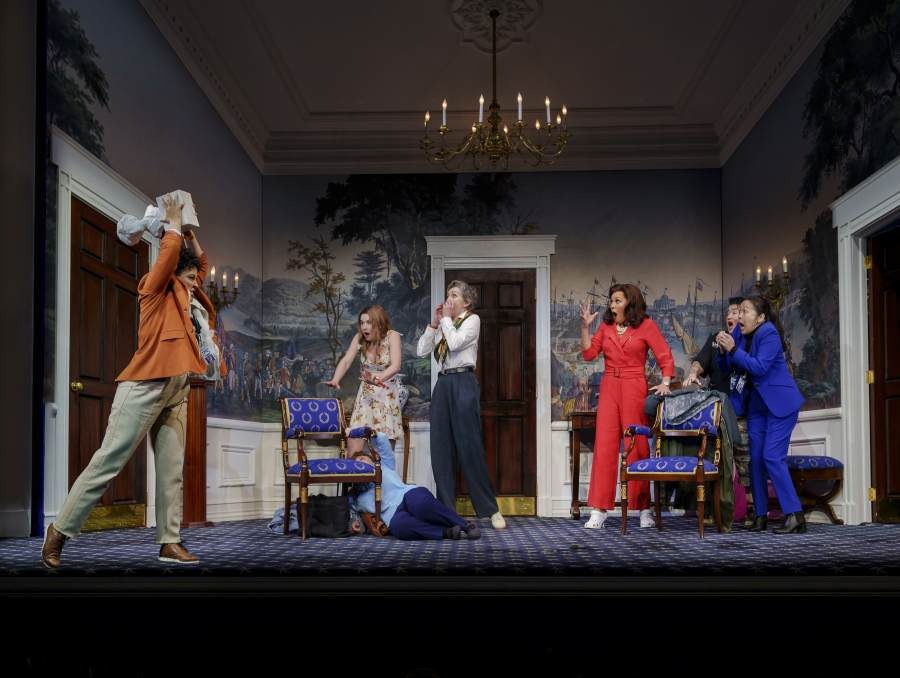 A female press secretary, a female chief of staff, a first lady and several female assistants but even all of them together can’t keep the hapless president from occasionally opening his mouth and putting his foot in it or insulting foreign dignitaries and threatening world peace.

No, not Biden, Trump or Clinton, although some of the events in POTUS, the new farce at the Shubert Theater sound a bit familiar. In POTUS: or, Behind Every Great Dumbass Are Seven Women Trying To Keep Him Alive, some of the funniest women in theater demonstrate their skills in Selina Fillinger’s comedy.

Her pathetic drab little assistant is Stephanie (the uproarious Rachel Dratch) who takes some pills and staggers around the stage in a drug-induced state for most of the show Although it’s been done countless times, Dratch brings fresh humor to the situation. Suzy Nakamura plays Jean, the press secretary whose job it is to spin the president’s gaffes, and she had her own baggage including a relationship with Bernadette (Lea Delaria) the president’s drug pushing pusher felon sister who suddenly appears, hoping her brother will sign her pardon.

Much of this is predictable, especially the lesbian relationship, but the premise of a behind -the- scenes peek at the White House keep us laughing And then POTUS’s special ‘friend’ Dusty ( Julianne Hough) shows up to tell him about the surprise she’s carrying for him. So the president is a philanderer as well! Add to the mix, the stately first lady played by Vanessa Williams and Chris (Lilli Cooper) the erstwhile reporter trying to dig up a juicy story.

Like much good comedy, POTUS has visual as well as verbal and situational humor. The president’s wife, an elegant lady, has been criticized for not being ‘earthy’ so each time she appears, she’s wearing fashionable clothing and ridiculous high-heeled crocs. Chris, dealing with childcare issues while competing with men for her job, appears the first time with breast pumps hanging from her shirt. Playwright Fillinger, one of the writers for “The Morning Show,” incorporates different forms of humor ranging from broad physical comedy (Dratch) to visual humor to the more nuanced use of situations as the audience watches the real powers behind the president. She is also able to get humor from language, beginning with the c-word and to other expletives the characters utter as they try to fix the president's messes.

Director Susan Stroman (“The Producers,“ “Contact,” “Crazy For You”) deftly directs the almost non-stop action. The setting (design by Beowulf Boritt ) moves on a turntable that adds to the frantic pacing of the show. Eventually the entire theater becomes part of the stage. Most of the other creatives for the show are female and extremely talented. Costumes are by Linda Cho, lighting by Sonoyo Nishikawa and Jessica Paz is responsible for the sound design.

Throughout all the chaos, the women try to protect the president who never really appears and is unaware of the mess he’s made. Yet the women, particularly Harriet who has her own political aspirations, get no credit for what they do.

In reality, much of the action in POTUS is somewhat predictable, but it does give the comedians and Hough (who sings and dances) a chance to strut their stuff. The comedy offers a perfect example of a farce, complete with inane behavior, horseplay and absurd situations. They say behind every successful man is a woman, and POTUS features seven.

It’s inevitable that the audience might think about Hillary and Michele and even perhaps Melania as it watches the show. The dedication in the script reads, “For any woman who’s ever found herself the secondary character in a male farce.” POTUS would make a great girls’ night out-especially for gals with ineffectual male bosses.