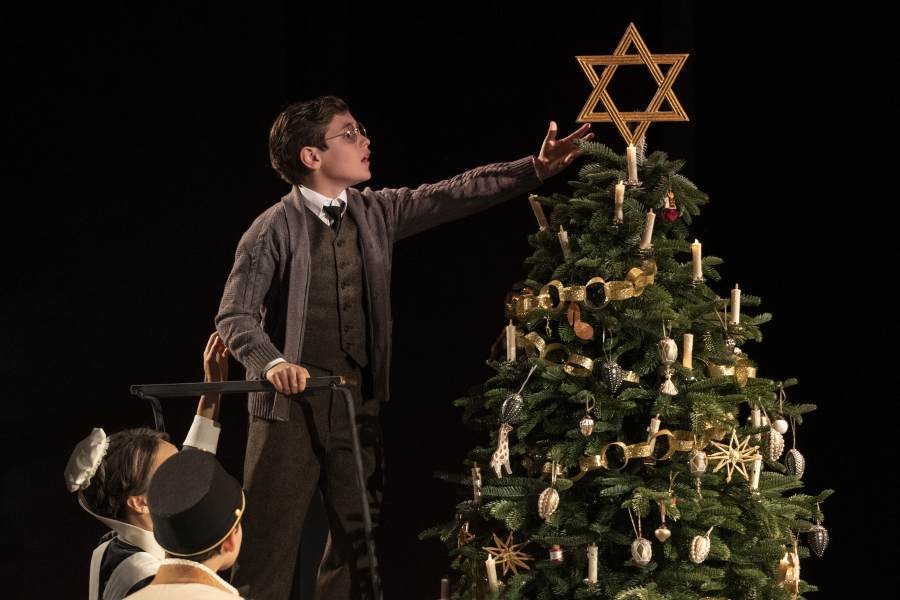 In his most personal work yet, playwright Tom Stoppard tells the story of the Merz family. Somewhat autobiographical, “Leopoldstadt” begins with a tableau of an extended family in Vienna in 1899. It is Christmas time, and, although the head of the family, Grandma Emilia (Betsey Aiden) speaks of being Jewish, the Christmas tree in the rear of the drawing room is a vivid example of the family’s assimilation. Then one of the youngsters places a Jewish star on top of the tree. Grandma holds the family together and keeps their Jewishness alive by insisting on family holidays, and in a later scene, the family conducts a Seder.

Through the lens of one family, the drama unfolds over the course of 55 years during the most tumultuous time in Jewish history. With the exception of the major characters, the relationships of the large cast of 38 is confusing. Hermann Merz ( David Krumholtz) runs the business his father created and works to make connections with influential people. He marries a non-Jew, Gretl (Faye Castelow) and he converts to Catholicism but the conversion doesn’t seem important; in fact, it seems more like a business decision. The Jews of Vienna are people of intellect and culture, yet as we know with the gift of hindsight, their religion will ultimately impact and destroy the family. Hermann’s conversion will become meaningless.

Although there are examples of anti-Semitism in the play, there is no actual violence on stage. The most upsetting scene is the threatening presence of a German officer who comes to the house, demanding that Hermann sign over his business. The adults obey in fear. The officer commands Hannah, a former concert pianist, to play for him and the children cry and whimper at his presence. When Hermann pulls a pen from his jacket to sign the document, the German pockets the pen.

Nothing new is revealed in “Leopoldstadt,” but the audience knows recent history. When Nellie refuses to leave her elderly parents to join her fiancee in England, we silently urge her to go. Later she does escape with her young son Leo, who ultimately returns as an Englishman. Some viewers suggest the character of Leo is Stoppard himself.
In the last scene Leo comes to Vienna to meet his two surviving relatives. Leo left the country when he was young. His name has changed and he barely remembers anything. His mother remarried and he took his father’s name. Stoppard himself was born in Czechoslovakia, and he, his brother, and mother were Jewish refugees who settled in England when he was only eight years old. He only learned he was Jewish when he was in his middle age.

This play is personal. It is about real people and what they experience; they are someone’s family. Under the skillful direction of Patrick Marber, the drama is well acted. The play is beautifully written.

The play begins in 1989 and as years pass all the scenes occur in the same home. At first the well-appointed set depicts the luxury and wealth of the family. (Set design by Richard Hudson.) As their fortunes change, the room is more sparsely furnished.

Just as a theme can run through a play, sometimes a well-placed prop can have profound impact. In the first scene, Gretl is having her portrait painted. In a later scene, that same portrait hangs prominently in the Merz’s home. By the conclusion of the play, the survivors are fighting to retrieve the painting, which had been stolen. The theme reminds the audience that there are many lawsuits pending today as people try to get back the artworks taken from their Jewish ancestors.

As the oldest, Grandma is also the family historian. She clutches a photo album and notes that many people pictured are unknown and nobody remembers them. This is one of the strongest themes that runs through “Leopoldstadt.” People should never forget their ancestors and where they came from. The phrase “Never Forget” is often invoked when discussing the six million victims of the Holocaust.

At the end of the play, the theme of remembrance reappears.Three family members, one from America, one from Austria and one from England, meet in the old family home after the war. They read a long list of lost relatives and their fate. (Auschwitz, Suicide, etc.) It is a simple scene, quiet and powerful but very moving and a fitting way to end the play. “Leopoldstadt” reminds us to remember that the dead were more than just numbers; they were vibrant families.