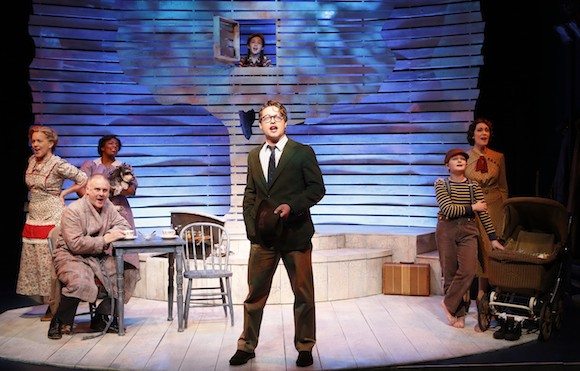 The Irish Repertory’s production of A Christmas Memory has all the makings of a seasonal classic: a heartwarming story, beautiful music and a brilliant star turn by Alice Ripley who plays Sook, the child-like distant cousin of young Buddy, played by Silvano Spagnuolo as a child and by Ashley Robinson as an adult. Based on Truman Capote’s autobiographical short story, the show centers on the relationship between the boy and the older woman, who spend their time together seeking adventure and staying away from the “adult world” and obligations, much to the disapproval of their relatives Jennie (Nancy Hess) and Seabon (Samuel Cohen) who feel the boy is straying from the path of “proper boyhood” and wish to send him to a military school.

The show is narrated by adult Buddy, who walks among the younger characters as if visualizing ghosts of times long gone. The plot is built around anecdotes in which we see him make fruitcakes with Sook and go on small adventures with his tomboyish neighbor Nelle Harper (a scene-stealing Taylor Richardson), as his older self reflects on the meaning of these events with housemaid Anna (Virginia Ann Woodruff). The characters are beautifully realized and the book by Duane Poole has such economy that we are able to see these people’s entire lives up to the moment we meet them, through key words and expressions they use.

The scenic design by James Noone is an essential part of the show, as it brings together past and present through clever visual motifs, while making the most out of the intimate stage size. The show as is, feels like it should never move to a larger venue because doing so might make it lose its delicate power, the audience is so close to the characters, that they can almost smell the ingredients being described by Sook as she makes her cakes. The music by Larry Grossman and lyrics by Carol Hall offer some absolutely precious moments, gorgeously sung by the ensemble.

And then there’s Ripley, who might very well single-handedly carry the show’s emotional weight on her shoulders, and yet is so in tune with the ensemble, that she makes her performance seem effortless and low-key. The way she looks at young Buddy when he talks to her, the way she looks away from other adults who remind her about her responsibilities, and the way she moves across the stage, both self aware and trying to blend in without being seen, make for a balancing act that would become scenery-chewing or obliviousness under the hands of lesser performers. The fact that Ripley’s Sook is but one of the many lovely memories one takes away from this show, feels like a small miracle on its own.