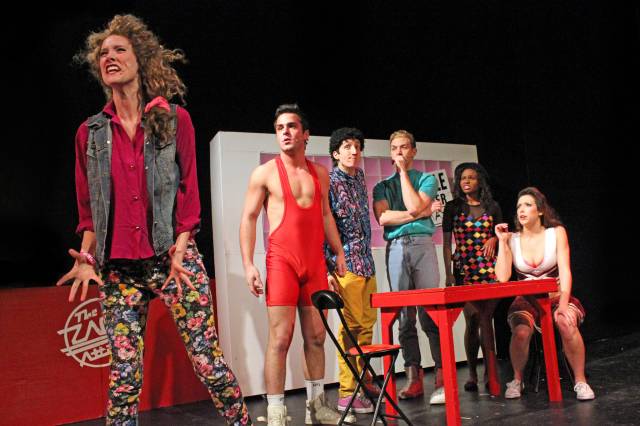 The best parodies are those that not only trivialize and satirize the elements and traits of their subject, but those that do so because its creators are so versed in the matter, that the jokes land with equal amounts of humor and heart. Bob and Tobly McSmith’s Bayside! The Musical! is a perfect example of this. Their hilarious take on 90’s sitcom Saved by the Bell is filled with loving nods to the show, pitch perfect performances from the ensemble and melancholy commentary on how much the world has changed since the show originally aired.

Set in Bayside High School, the show kicks off as the students start their new school year. We catch up with smartass Zack Morris (Sam Harvey), cheerleader extraordinaire Kelly Kapowski (Katie Mebane), dimwitted jock AC Slater (John Duff), overachiever Jessie Spano (April Kidwell), stylish gossip girl Lisa Turtle (Shamira Clark) and lovable nerd Samuel “Screech” Powers (Justin Cimino). If you’re not familiar with the show, there’s no need to worry, for the very first song “Back to Bayside” not only introduces them, but delineates their complete character arcs, catching up newbies and making lovers of the show holler from laughter. From Slater’s “hey mama” and Jessie’s response of “hey pig”, to an appearance by Becky the Duck (a chameleonic Amanda Nicholas), the song makes it obvious that this will be a spitfire kind of show, with the jokes being fired at a pace so merciless you’ll still be recovering from the pain-in-the-belly provoked by a joke, as the next one arrives.

The plot in the show is quite simple, the gang discovers that they’re closing The Max, their favorite burger joint, and the only way to save it is if they’re able to raise $500. The kids make it their mission to get the money because, as they sing in the Pixies’-inspired “Dream Sequence”, “if The Max closes we’ll have nowhere else to go, we hang out here everyday it’s the only place we know”. The McSmiths’ music is catchy and their lyrics are tinged with poetic vulgarity, “Screech’s Secret Sauce” for instance owes its tasty properties to something that colloquially rhymes with “mom”, and in “All Girls Slumber Party”, they point out how the show often oversexualized its characters and especially the actresses playing them, in “Lift! Jump! Bend! Stretch!” the girls, wearing leotards, even invite audience members to “pause and rewind this scene, just remember we’re only seventeen”.

The McSmiths, who also directed the show, did a similarly terrific job in the sensational Showgirls! The Musical!, which not only poked fun at the seminal (seriously, no pun intended) 1995 film, but also announced the arrival of the incredible April Kidwell who seems to have been born to play Elizabeth Berkley. As in Showgirls!, she completely owns Bayside! making her Jessie Spano not only a perfect replicate of Berkley’s, but also proving herself to be an actress willing to give it all onstage. While the rest of the cast is great, Kidwell elevates the show to something akin to watching a magic show as a child; just when you think she’s showed you all her cards (not to mention her boobs once or twice, which she does to great comic effect without an ounce of coyness) she pulls off something even better. Her performance is in a class of its own.