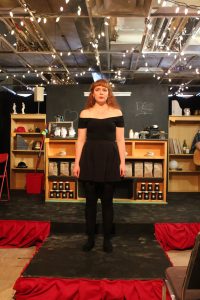 In “Confessions of a Red Headed Coffeeshop Girl”, the sassy, sarcastic, and humorous Rebecca Perry brings us inside the everyday life of Joanie Little as she takes on her first real job after college. As we are soon to find out, there is, in fact, nothing little about her at all.

The one-act show exposes us to a barista’s typical daily chores, including her customer interactions. Joanie pokes fun at the stereotypes that walk through her door each day, but she still somehow manages to make them seem likable; but despite the superfluous nature of these encounters, and how much time she spends talking about them, we realize that Joanie's biggest interest is finding herself.

The play is performed through a unique combination of styles, as Joanie goes from using dialogue to inspired musical riffs between scenes, allowing for a more expressive segue between her stories and her emotions. As Joanie takes the stage for the first time, to perform "Rivers and Roads" by The Head and the Heart, she prepares us for a soliloquy meant to encompass the current state of her life. At age 21, after sixteen consecutive years of schooling, Joanie has finally made it to "the real world". How will she find a job? Who will she live with? When will she finally pay off her loans? Questions are asked aloud in hopes that answers will come in return.

During a later scene, she suggests she might have a romantic interest in one of her customers as she sings Judy Garland's “Zing Went the Strings of My Heart”. While her love interest never appears onstage, we feel as if we know him, as she describes him through a series of letters they exchange during their seemingly routine coffee interactions. "Dear when you smiled at me, I heard a melody, It haunted me from the start. Something inside of me started a symphony, Zing! Went the strings of my heart," she sings as we sigh along with her.

Our eyes and ears are locked into Perry's performance for the play's entire duration. Her stage presence, vocals and sense of humor are tremendous and by the time you leave this little coffeehouse, you too might have discovered something about yourself.