September 12, 2014
Theater Review
Review: The March of the Bonus Army 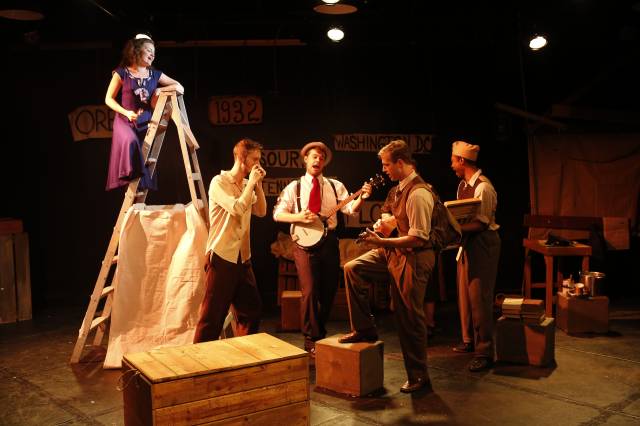 Oracle Theater Inc presents a compelling historical story about the men who fought for our country in the first World War, and the challenges they faced upon their return. Through the strategic use of culturally relevant music, character metaphors, and identifying costume, we experience a period of time where America was certainly the land of the free, but not so clearly a welcoming home of the brave.

The end of WWI marked a moment in history that sparked the Roaring Twenties -- a time of music, culture, and economic prosperity -- which quickly led to the Great Depression. Throughout both the highs and lows, there was one consistency: veterans lacked respect, fair compensation, and a place to call home. With the promise of bonus certificates for their wartime services only being dispensed come 1945, one man decided enough is enough and led a march on Washington, D.C. in 1932 that inspired thousands who joined him. The public dubbed these 20,000 veterans "The Bonus Army".

This ensemble of six does an excellent job of portraying a location, idea, or event throughout each scene by transforming from one character to another. Their layers are built upon and stripped away at points in the play that offer explanations and elicit emotions. Actor Tom Frank represents Portland, OR, the city where the march was born by one of the key leaders of the Bonus Army, Walter Waters. Appearing second, Jude Sandy depicts the fight for racial equality among his service men and brothers. Samantha Cunha is a figure of mothers: she plays Portland's mother, and the Anacostia Flats, base camp of the Bonus Army. As a symbol for veterans of the early 1900's, Christian Thiel Titus plays St. Louis and relates us back to the men of the Civil War. On the journey to D.C., Ian Patrick Poake embodies Washington; he quotes political figures running for office, J. Edgar, President Hoover, General MacArthur, among others. Lastly, Rita McCann is the presence of action --  she is the voice inside Portland's head, the frustrated citizens of Washington, the conflict in the camps. Together, writer Isaac Rathbone and his talented cast vividly re-tell a story most Americans have never heard.

Isaac's conscious and heartfelt choice to write about these forgotten men plays importance in our society still today. In 2014, we enter the 100th anniversary of WWI. Yet, ever-present is continuous effort of gaining civilian, government, and political support for the men and women who serve our country and fight for our freedom. With Presidential reinforcement and growing individual group aid in our modern-day, we can hope that indifference towards our veterans' loyalty and duty becomes an evanescent recollection of the past.