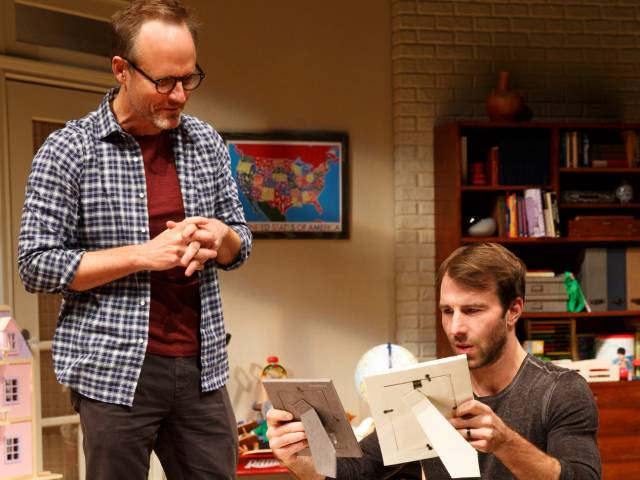 Rob (Patrick Breen) and Alan (John Benjamin Hickey) “grew up gay” during a time when they had little or no rights, when their close friends were succumbing to AIDS, and when the idea of two men getting married was as fantastical as a unicorn. Fast forward through the Obama era, and not only are they married, but have also become parents to a little girl who “they” fathered biologically. As Rob relishes in the joys of parenthood, Alan feels like he’s playing second fiddle both to his daughter, and his husband, following the orders of one and the whims of the other. This is the basic premise of Dada Woof Papa Hot, an oft-bland account of gay parenthood that tries hard to emulate similarly bland stories we see on stage almost too frequently. It’s as if the arrival of new rights, means the instant loss of transgression and provocative ideas.

When we first meet Alan and Rob, they are having dinner with a younger couple, formed by Scott (Stephen Plunkett) and Jason (Alex Hurt) who they have targeted in advance as potential cool parents to hang out with. Immediately you get a sense that this is part of Rob’s plan, as Alan moves restlessly on the table, like a child who wishes he was somewhere else. His interest is piqued once he learns that Jason and Scott have an open marriage, and before long he finds himself alone in a nursery with the overtly sexual Jason, who kisses him leading him to utter something along the lines of “I’m not a Kate Winslet character”. And boy, would he be lucky to be one! In films like Little Children, which touches on similar topics of marital discontent among the privileged, Winslet is at least allowed to have emotions that don’t seem to have been endlessly rewritten and over-examined. Watching Winslet’s chest heave, her forehead perspire, and those soulful eyes ponder whether a moment of lust is enough to “sacrifice” her marriage, one gets a sense of a life unfulfilled, and needless to say so there is more life in one of Winslet’s sweat beads, than in any scene in Dada Woof Papa Hot, which is stilted and overstudied to the point where it feels mummified.

It’s slightly disappointing that in a play that thinks of itself as so groundbreaking when it comes to addressing the concerns of gay men, it’s a heterosexual woman who steals the show, by not only conjuring the doubts boiling among the audience, but also by allowing herself to live with her imperfections. The woman in question is Julia, an actress acquaintance of Alan, played with earthy gusto by Tammy Blanchard. During a scene set in a playground we see Julia deal with: misogyny coming at her from both gay and straight men, the stress of parenting, acknowledging her position in the world as a woman of a certain age, and also allowing herself to be a fulfilled sexual being. It’s a performance of such delicious economy, that one wishes the entire play had been about her, and also you wonder why didn’t playwright Peter Parnell give all of his characters this much humanity.

There’s a recurring theme in the play about how Alan’s little girl has become fascinated with Peter and the Wolf, a story that might prove too sinister for some adults, not to mention children. Motifs from Sergei Prokofiev’s composition are heard throughout the show each time Alan finds himself terrified of the figurative wolf who wants to swallow him whole; whether it’s adultery, inadequate parenting, or x number of personal demons, the play serves as a reminder that adulthood is perhaps only a state of mind. One wishes it hadn’t decided to treat most of its characters like children.