Dead Dog Park is nothing if not topical. The brief but packed piece, directed by Eric Tucker at 59E59 Theaters, is about Rob McDonald, a white cop who is put on trial for pushing a black teenager named Tyler Chapin out of a window. In some ways, it feels as if playwright Barry Malawer would like this story to reside in a social vacuum, for it to be a personal story instead of a polemic one. But it is nearly impossible for a play that subjects on race and unjustifiable police force to exist merely as a character piece.

The first scene of the play occurs on the day of young Tyler Chapin’s four-story fall. It is not known whether he will live or die. But more problematic is the fact that we never know if Rob – the white cop in question – actually pushed Tyler or if he tried to grab him in an effort to save him, as he argues to everyone around him.

What follows from this first day is an examination of aftermath, both for the policeman and for the mother of the victim. But Rob (Tom O'Keefe) is unquestionably our main character here. And it’s his struggle we are meant to empathize with. As a de facto jury, we should be giving him the benefit of the doubt, right? We didn’t see what actually happened, and the hospitalized Tyler is unable to recollect the course of events. 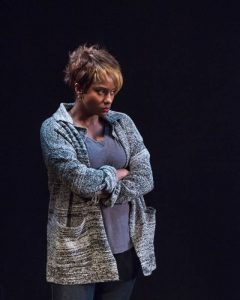 There are a few encouraging digressions. There is the nihilism of John Jones (Ryan Quinn), the black defense lawyer who is out to win regardless of what he personally feels is true or just. Quinn inhabits the character flawlessly, employing a darkly comedic confidence to make a statement about the arbitrariness of how race is placed on trial in America.

There are constant side investigations, little explorations into the characters, who all get their opportunities to present themselves as full and complex people. There isn’t much to criticize in terms of character development, either in the script or in the efforts of the more-than-game cast.

Because Dead Dog Park forces us to view this conflict from the perspective of a presumed-innocent white police officer, we are then forced to ask of it: why? Is it simply a racially-charged situation rife with dramatic potential? That potential is certainly mined here.

But there is a reactionary danger in asking a mostly-white Manhattan audience to side with the white authority figure. White authority figures are not the ones in need of the benefit of the doubt. Dead Dog Park doesn’t come out and directly assert any sort of reverse racism message. But it does allow us to believe that a white cop is being wrongly indicted, which is a strange thing to narrativize in a country where imprisoned police officers are all but nonexistent.