November 17, 2016
Theater Review
Review: The Death of the Last Black Man in the Whole Entire World AKA the Negro Book of the Dead 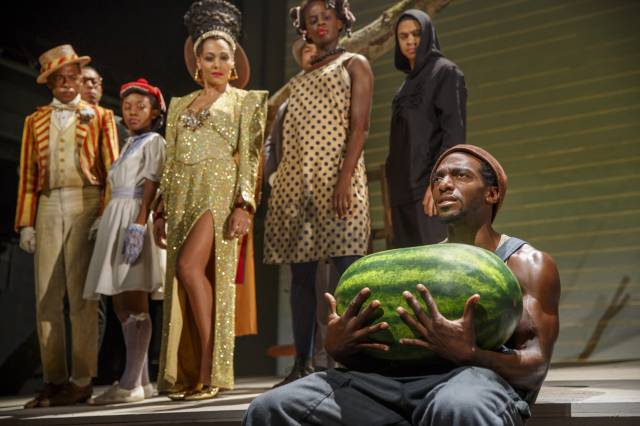 When the characters in The Death of the Last Black Man in the Whole Entire World AKA The Negro Book of the Dead speak, what comes out is a jumble of words: lyrical, emotional, tautological. A man in overalls sits with a watermelon in his lap. Where did it come from and what does it mean? Black Man With Watermelon (Daniel J. Watts) doesn’t seem to understand the part he’s been cast in. He’s one of eleven actors on stage, named and dressed to evoke historical African and African-American stereotypes. Throughout the play’s compelling 70-minute run, the audience struggles to break through these stereotypes to the people underneath. Playwright Suzan Lori-Parks struggles with us.

Death of the Last Black Man premiered in 1990, years before Trayvon Martin, Amadou Diallo, and Rodney King, and reckons with a history that goes back much further and is even more mysterious. It’s the first play in Parks’s year-long residency at Signature Theatre, which will also include Venus (1996), In the Blood (1999), and Fucking A (2000). In Lileana Blain-Cruz’s energetic production, the characters dance and bound across the stage, reenacting Black Man’s many deaths. But it’s the relationship between Black Man With Watermelon and Black Woman With Fried Drumstick (Roslyn Ruff) that anchors us and gives us something human to hold onto.

The other characters provide stirring and tantalizing glimpses into their own intertwined fates. A young man, in red sneakers and a hoodie, is strapped into an electric chair, the “juice” surging through him. A little girl repeats “Prunes and Prisms,” an exercise meant to cure her of her big lips. An African queen explains, with both her hips and her tongue, the roundness of the world. These aren’t characters at all, they’re refrains. It’s as if we’ve stumbled upon the funeral procession of a stranger... We’re overwhelmed by a vague but familiar sense of loss. We can identify the mother, the father, the spouse. We can see the grief and bitterness written on their faces. And we can guess at the ending, because most funerals end the same way, with bones in the ground and lives that have vanished into the past.

“Miss me,” Black Man with a Watermelon entreats, “Remember me.”

Elsewhere Parks has said: "Theatre, for me, is the perfect place to 'make' history -- that is, because so much of African-American history has been unrecorded, dismembered, washed out, one of my tasks as playwright is to ... locate the ancestral burial ground, dig for bones, find bones, hear the bones sing, write it down." And boy, do those bones sing. And dance.

It makes for a challenging and abstruse piece of theater, one that may not be satisfying to those seeking a neat and moralizing social drama (in the mode of Athol Fugard, whose plays are being staged in the theatre across the hall). And even the most patient and open-minded audience member will come away with more questions than answers. Even so, there’s something valuable and vital here. Now, as much as ever, black bodies, even and especially the dead ones, have stories that need to be told and discovered and learned anew.