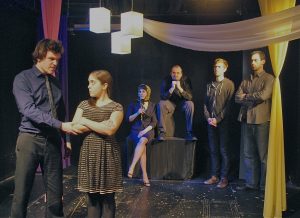 In the first installment of their Weaving Series, a series which weaves together two or more Shakespearean plays in innovative ways, the theater group Bottoms Dream has brought to the stage an amalgamation of "A Midsummer Night's Dream" and "Romeo and Juliet", called simply "The Dream". Through the eyes of Nick Bottom, we are treated to the story of one daughter, two suitors, a disapproving father, an obsessed pursuer, two inconspicuous fairies, and a tale of star-crossed lovers.

In the opening scene, Nick Bottom and his fellow writer Quince are trying to construct a plot for a play to present before the Duke and Duchess of Athens. What follows are a series of recognizable scenes from "A Midsummer Night's Dream" that lay the foundation for the storyline. Hermia (Caitlin White) loves Lysander (Sean Driscoll), but her father Egeus (Sean Lounsbury) believes her best suitor to be Demetrius (Matthew Castleman). While Hermia denies her father's match, Helena (Joann Sacco), a girl of Athens, proclaims her love for Demetrius, who does not return her desires. The four young lovers escape to the woods at night, where Hermia and Lysander go to unite their love, and Helena and Demetrius follow in hopes of changing minds.

One key scene from the original play that has been redesigned for "The Dream" includes plotting from Oberon (Corey Whelihan) and Titania (Meghan Blakeman), the King and Queen of the fairies, with trusty pixies Puck (Ariel Marcus) and Peaseblossom (Emily Philio). Each fairy is to 'set a spell on lovers' eye' to correct the destinies of those traveling through the woods. It is here that Bottom's dream occurs: while under spells, the characters of "A Midsummer Night's Dream" transform into characters from "Romeo and Juliet". Unfolding before Bottom is an account of two lovers who cannot be, for their families are enemies and Juliet has been promised to another man. The framework of this dream, of course, is comparable to Hermia and Lysander's tryst in reality. After the night passes and the characters awake, Bottom uses his visions to alter the script he is presenting in Athens.

Weaving these two specific plots together was an inventive choice: each of Shakespeare's plays interprets the themes of forbidden love and unfortunate endings from Ovid's "Pyramus & Thisbe", which is revealed at the end of the play in Nick Bottom's performance for the Duke. Artistic Directors Nat Angstrom and Caitlin White put together a beautiful and rich performance with an exceptionally talented cast and crew.

For more on Bottoms Dream and the Weaving Series, check out the website: https://www.bottomsdream.org