January 11, 2016
Theater Review
Review: “Employee of the Year” at the Under the Radar Festival

I recently spent some time with a friend’s three-year-old daughter, and watched the girl playing with a baby doll in a toy stroller. I noticed the tender seriousness with which she cared for her inanimate child, scolding it occasionally as she maneuvered the plastic pram around the corners of her living room. I was struck that here is something slightly bizarre (but absolutely natural) about most young girls’ fascination with playing Mommy, and their seemingly primal instinct to reenact mature scenarios beyond their scope of experience for fun. I found myself thinking of girls playing with dolls while watching the five young women (all under the age of 12) in Employee of the Year deliver the tragic story of J., a woman who sets off on a lifelong search for belonging after her childhood house burns down and with it she loses all tangible connections to home. This comparison is compounded by the fact that the young performers are often striking poses reminiscent of dolls, with arms at 90 degree angles, bent slightly at the hip, staring directly at the audience while reciting words that are not their own. The resulting performance is undeniably powerful and uncanny. The story follows the character J. from age 3 to age 80, but while the story is vast, the performers are slight in scale.

Employee of the Year, currently presented at the Public Theater as part of the well-curated 2016 Under the Radar Festival, is the latest offering by the Obie-Award winning theater company, 600 HIGHWAYMEN (600 HWM). This episodic first-person narrative, written and directed by Abigail Browde and Michael Silverstone, the husband/wife creative duo behind 600 HWM, features many of the signature elements that are characteristic of this fascinating, young company’s work. The gestural movements and the use of untrained actors suffuse the piece with an aching innocence and beautiful familiarity.

While openly working within the manufactured framework of theater, 600 HWM strives to strip away the elaborate facades associated with most traditional theater and emphasize the human aspects of the live event. While watching the spare performance designed by Jessica Pabst and Eric Southern (another notable husband/wife team), I had an enhanced awareness of the fact that we were simply a bunch of people congregated in a quiet room together. The pretenses of traditional theater were laid bare in moments when a performer would cough or clear her throat, and similar sounds of human bodies would echo back from the rapt crowd - a chorus of humanity in all its mucus-y, stomach-rumbling glory.

The acting style is most effective when the young women resist the urge to “perform” or “pretend” and instead speak the text simply and boldly. Notably, there are no microphones used in the production, requiring the performers to mightily project their pure voices to fill the large space. The quality of these young female voices, like nearly every element of this exciting piece, feels inherently political. Some speak with braces, others with subtle lisps due to adolescent teeth which will likely someday be corrected with orthodontics. As they work to fill the space, their voices pitch up plaintively, emphasizing their youth, but the bravery and confidence of their performances make these girls impossible to dismiss. Rachel Dostal opens the show solo as J. at 3, and she commands attention while setting the neutral tone of the play. She traverses the stage in straight, deliberate lines, stretching her hands out and asks, “Where’s my mom. Where is she? Where is anyone?” These questions will remain at the heart of J.’s journey. Ms. Dostal jumps 10 years and J. is 17 and we learn about the fire that incites the play’s action, when she finds out the woman she lost in the fire, Diane, was not her biological mother.

Subsequent girls replace Dostal, taking over the narrative and performing secondary characters, and physical objects mentioned in the text. The words they speak and, perhaps more strikingly, the words they sing, are wry and wistful. Alice Chastain Levy stares guilelessly into the audience, and sings about J.’s humdrum romance with a man who will become the father of her son:

As this production forgoes amplified sound, the songs are delivered a capella, and each performer proves to be a strong singer with impressive pitch. Composed by performer/songwriter David Cale, the songs are heartbreaking and darkly funny. The music is a wonderful blend of styles. In my notes I wrote: Vaudevillian, Torah Chanting, Chanson. 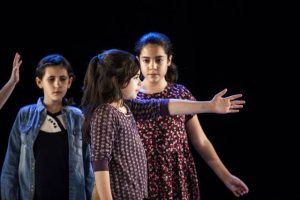 The early songs are moving in their pure simplicity. Stella Lapidus is mesmerizing, her entire body shaking with nerves and effort as she holds her choreographed pose and sings about Canada Geese. The songs showcase each actor’s strengths, and set the satisfying pace of the production. Violet Newman delivers a punch of a performance with a song that reenacts a phone conversation between J. and Rick, a family friend who takes her in after the fire, who had a brief affair with J.’s birth mother. In this song we learn about the circumstances that led to J.’s conception - a theatre troupe in northern New Hampshire, a “much older painter”, and her mother, an unstable woman who “had some kind of breakdown.” Over the course of the play, we watch J. age, have a child of her own, and continue her obsessive search for her mother, which ultimately supersedes every other aspect of her life and consumes any potential paths to fulfillment.

In the final act the play asks, “What are the things I’ll remember the most in my life? … What will remain and endure?” It’s difficult to watch the enduring, meandering memories of a person’s life without considering one’s own memory. Why do some trivial moments remain with us while other significant events fall away with time? The artists address this unavoidable urge for self-reflection when Candela Cubria introduces herself to the audience as Candela Cubria, the first to step out of the role of J. She drops the mask of the external character and sings a song that is blissfully sweet and straightforward. She begins, “Will I remember being in this play when I’m sixty?” Ms. Cubria talks about her mother who will find her after the show and drive her back to Williamsburg while she falls asleep in the passenger seat. We are explicitly reminded that these are children on stage, but within the context of the story’s sorrowful magnitude their youth feels profoundly precarious.

Cubria sings out, “Will you remember my face when I sang you this song?” Precisely when the piece seems to push our empathy for these young performers beyond point objectivity (Of course I’ll remember you, Candela Cubria! I’ll remember you all!) Rachel Dostal, who introduced us to J. at 3, returns to pull the narrative back to J. at 80. We are distanced again and the incongruous relationship between performer and character is never more clear. We follow the story to its appropriately unfulfilling conclusion and discover the meaning behind the play’s title. It would have certainly been more pleasant to conclude on the strong quirky note of Ms. Cubria’s song, but the play makes it clear that life is rarely simple and we do not get to choose how things end.

Performances of "Employee of the Year" continue at the Under the Radar Festival through January 17.