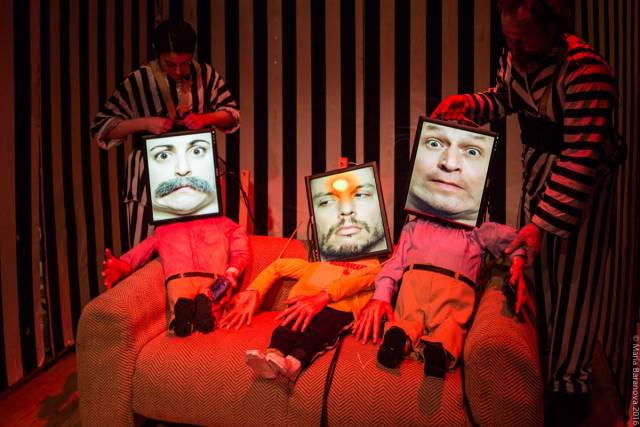 I don’t know about you, but lately my social media feed has been exceptionally hostile. Peppered in amongst the usual think pieces and cat videos are comment exchanges that an outside observer might assume were between mortal enemies, but are ostensibly rigorous discourse between “friends.” It’s gotten ugly, and I would be lying if I said I didn’t experience a kind of schoolyard thrill while watching my peers demoralize each other on the internet. Steve of Tomorrow perfectly captures this childlike cruelty in a manic, digital dream piece of theater at HERE Arts Center. Their live portrayal of a comment thread is hilarious and spot on, complete with a Michael Jackson reaction GIF. Using live feeds, green screens and video puppetry to invoke the 24-hour news cycle and natural disasters, the work is a rapid, frequently funny, multi-media assault on the senses.

The story follows Ralph and his curmudgeonly live-in boyfriend, Scott. Ralph has a sci-fi blog with a devoted, albeit heated, following. When he posts an open-invitation to time travelers he is visited by Steve, a lazy, apathetic journeyer from the future. These characters are portrayed by “video puppets,” whose heads are screens attached to plush bodies with red rubbery hands. The puppets are simultaneously bizarre and oddly charming. Their GIF-like faces appear on the screen, shifting between still images of the performers making obtuse facial expressions. Janelle Miau, founder of Ignorami Studios, provided video animation for the piece, which employs many technically innovative techniques. David Commander, who wrote, directed and performs in the piece, sums up the digital aesthetic perfectly in a fundraising video, saying: “we have technology all over this thing, like ugly on an ape.”

The performance is athletic; each of the artists show incredible range and a remarkable confidence with chaos. Lisa Clair shows off a comedic assortment of voices and dialects and is endearing as the mustachioed Ralph. David Commander is more aggressive in his approach, delightfully ham-handed while fiddling with action figures and camcorders. Rob Ramirez, a prominent digital media darling, co-created the work with Commander and performs the laconic voice of Steve. The work is demonstrably inventive and manages to be both technically impressive and pretty janky looking. The mechanics of the piece are laid bare and we see the live assembly of the scenes projected on a sliding screen. Ramirez manages the interactive media, presumably making use of Cycling 74’s Max Media Software (with whom he is a developer) – as a follower of the field, I look forward to a future when these technical elements will also be revealed within the performance as transparently as the crunchy green screen and tethered monitors.

This play is ultimately an inexplicable live event that needs to be experienced first-hand. Any attempt to more thoroughly describe the content may lead to overly-intellectual pontificating on complacency and media saturation and the nature of… etc., etc. In addition to attracting off-beat theater goers and digital media wonks, the play will also appeal to sci-fi geeks and nerds of all creeds, who seek out like-minded obsessives on the blogosphere to collectively comb over their chosen niche material. The production just finished its run as part of HERE’s Dream Music Puppetry Program, but I would be surprised if this is its last performance. In the mean time, I look forward to digging into the artists’ related work, as each collaborator is actively contributing to the emerging field.