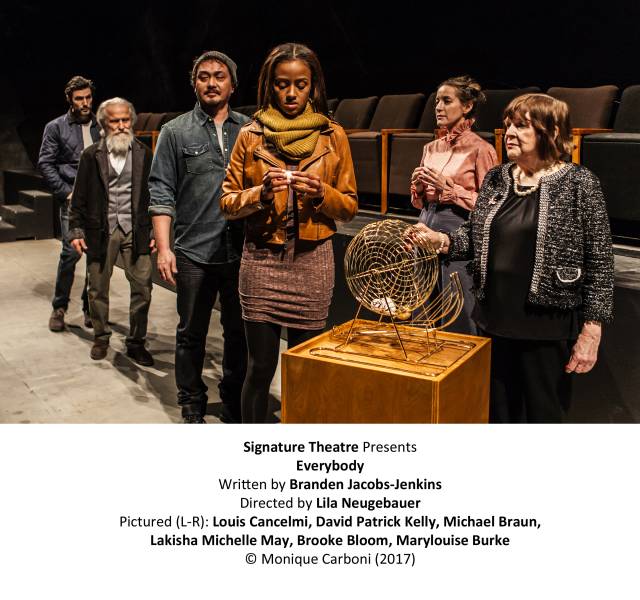 The biggest slog in any Theater History course has got to be Everyman, a fifteenth-century morality play of obscure authorship whose importance rests entirely on its surviving in parchment form up to the modern age while its contemporaries faded to dust. But I'll spare you the history lesson, for at the top of Branden Jacobs-Jenkins' adaptation, Everybody, it's addressed in depth. Indeed, the thrust and much of the humor in the play lives in its overtness.

Jacobs-Jenkins, who adapted the 1859 play The Octoroon in 2014, is keyed into the strange poetry of the old allegorical play. As in the source material, Kinship, Cousinship, Friendship and Stuff (the erstwhile "earthly possessions) are all personified and Everybody appeals to each to accompany him to his audit with God. But just as Everybody has no true clue what will come of the reckoning, the cast of the play don't know who they'll be playing until late seating, when they pick their roles from a lottery drum.

At first blush the casting seems a gimmick, but, thematically, historically and meta-textually the choice is a canny one. Jacobs-Jenkins knows how pointedly catholic (in all senses) the content is, treating on the one thing we will all go through. It's called "Everybody" for a reason (and the cast, no matter what night, are properly billed as "Everybody", as they will certainly play all parts in the play's now-extended run). The dialogue has fun with these broad stokes. "I liked all those pictures you put up of that small child slash animal in your family slash social circle," Friendship tells Everybody. Later, Cousinship open-endedly claims "a defining feature of our family is our sort of vague inner strength and our modest track record of occasionally overcoming specific kinds of obstacles." Laura Jellenik's set further drives home the universality, reflecting the orchestra with its own row of theatrical seats on the rim of the stage. We're all in this together.

The cast, whose roles I won't specify beyond the static ones (Marylouise Burke as a sweet, put-upon Death, Jocelyn Bio as God and others, Lilyanna Tiare Cornell as Time and Chris Perfetti as Love), are all remarkable. It was hard to imagine another iteration but therein lies the desire to revisit the Signature for another go. The lottery cast of Brook Bloom, Michael Braun, Louis Cancelmi, David Patrick Kelly and Lakisha Michelle May as directed expertly by Lila Neugebauer, play everywhere but in the acreage beyond the proscenium. They amble in the aisles and begin the show seated among us, dressed by Gabriel Berry both theatrically and credibly enough to pass as members of the audience.

This is not to say the production is stripped down; rather, it uses the givens of the venue to great effect. In a blackout, Everybody relates the dream they've had from their deathbed in an aural masterpiece of sound design from Brandon Walcott, who also wrote the original music. Lights come up in imperceptible increments, revealing Everybody, being whispered to in their own voice from the mouth of another actor, leaning in like a shoulder-perched angel or devil from the adjoining seat. Bigger spectacle is rolled out later with Raja Feather Kelly's trippy choreography and a big scenic reveal of the final unknown.

The result is a rare play that uses theater, both its history and its practical reality, to make theater. Though it risks becoming, as it self-describes at one point, a 'theater in-joke,' I contend Everybody may be all things to all people, but I can't imagine anybody not enjoying themselves and thinking a lot about it after they've been ushered off.