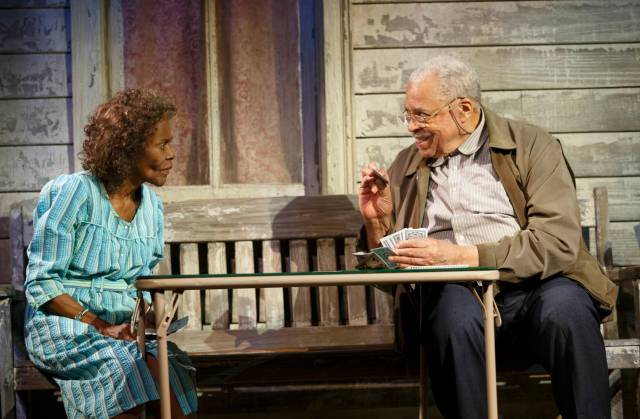 What a joy to be alive in a time when we can see acting titans James Earl Jones and Cicely Tyson onstage together! Their mano a mano in Donald L. Coburn’s The Gin Game is among the most electrifying in recent theatre, and yet, their work is so subtle and lowkey, that one wonders where all of this energy is coming from. Perhaps you can feel the excitement of your fellow audience members, or perhaps you’re aware of the historical connotations of having a show led by two actors well past their eighties who are reuniting onstage for the first time in five decades, or perhaps it has to do with how important the themes of the show are; how cruel our youth-loving society is with people who commit the sin of aging.

The play is set entirely in the front porch of a retirement home for senior citizens, where we first meet Weller Martin (Jones) as he grunts and puffs trying to find something to entertain himself with after having finished a game of solitaire. He is interrupted by Fonsia Dorsey (Tyson) who starts a conversation with him, followed by an invitation to play gin rummy. Weller’s eyes light up as she confesses that she doesn’t know how to play. He offers to teach her and as the two sit across from each other, Weller is sure he has found an easy prey he can use to satiate his hunger.

However Fonsia turns out to be a natural, and game after game she calls “gin” before Weller has had any time to gather his thoughts. In between games they discuss their lives before the retirement home - she has a son who never visits, he was once a very successful businessman - but slowly Weller begins to take all the losses personally and becomes aggressive as Fonsia’s winning streak continues. When his temper gets out of control and he pushes the table away, Fonsia promises never to speak to him again, and yet she shows up the following day eager for more. We realize that the gin games are only an excuse when what they both truly crave is company.

Through their destructive relationship we come to see how even feeling pain can be better than feeling nothing at all, as these two people who have been completely shunned away by their families and society, find comfort in their differences and arguments. It’s a tale that breaks the heart, and as performed by Tyson and Jones, it’s also a tale that serves as a much needed outcry. Jones, who towers over Tyson, in size and depth of voice, turns Weller into a man who is always on the verge of aggression. One can infer so much about his past from the way with which he dismisses Fonsia’s opinions and more than once tries to cheat her. As sweet and misunderstood as he is, there are also moments in which he shines through as someone who was thirsty with power, perhaps the very reason why his reputation as a businessman collapsed, Fonsia suggests.

Similarly, Tyson presents us with Fonsia’s entire life through her measured cadence, her bold sartorial choices, and her undeniable need to please others, even when they continue to hurt her. Is she trying to make up for something? At one point Weller blames her for having been a bad mother, not because he knows her, but because he thinks he has the right to pass judgment. This is what The Gin Game reveals itself to be about, it’s a play about the liberties we take when it comes to judging others and predisposing ourselves against them, because whether Fonsia and Weller were bad people or not, nobody had the right to forget about them.

Expertly directed by Leonard Foglia, this production of The Gin Game, is notable for its sparseness. The rundown-ness of the nursing home is theatrical enough to scare us, but also natural, so that we wonder how many people we might have known once are living in such conditions. The play never tries to preach or teach lessons, but to serve as foreshadowing, a cautionary tale even; will we find ourselves living like Fonsia and Weller at some point? Is there anything we can do to prevent it? What makes the measure of a life well lived? How do we provide others with dignity when we are denied it so often? Growing old in this world it seems, is no game at all.