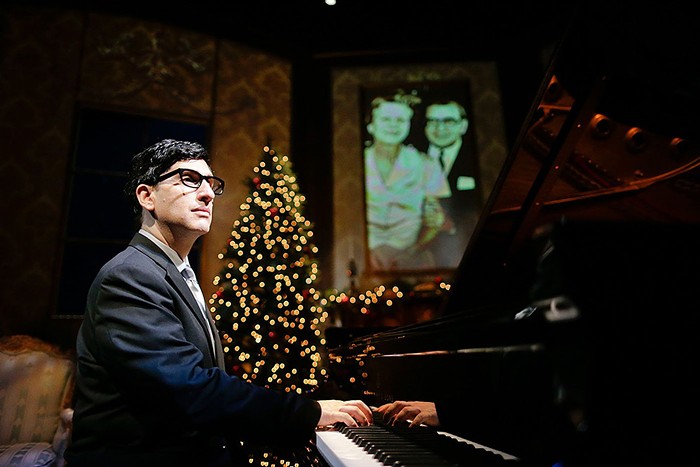 Isn’t it ironic that a Jewish immigrant from Belarus wrote “White Christmas,” one of the most beloved Christmas songs, as well as one of the most patriotic American songs, “God Bless America?” For these musical contributions and others, Irving Berlin, born Israel Beilin, is considered to be one of the greatest songwriters in American history; for these two songs, however, Berlin also received hate mail.

The audience at 59E59 Theaters learns these facts and others through the one-man show Hershey Felder as Irving Berlin. Felder has made a career of portraying famous musicians, including George Gershwin, Franz Liszt and Tchaikovsky and most recently, Leonard Bernstein in Maestro. Felder assumes the persona of Berlin and addresses the audience as if it’s a group of carolers singing outside his NYC apartment. Later he invites the carolers to sing along.

Despite being the son of a hazzan (cantor) Berlin himself did not possess a strong singing voice. I’m not sure if Felder purposely tries to imitate Berlin’s voice but his singing is definitely a weakness in the show.  Sometimes, it even lessens the power of the message. In the prime of his career, Berlin mounted his own shows and hired Ethel Waters, the first Black singer to headline on Broadway. After explaining Berlin’s concern about the lynchings in the South, Felder sings Waters’ song, “Suppertime,” an African-American woman’s lament for her lynched husband.  Instead of a tape allowing us to actually experience the passion and emotion of Waters, we hear Felder telling the story and the number makes little impression. The show is much more enjoyable when the audience hears the original movie performances of singers such as Fred Astaire and Al Jolson.

The show, directed by Trevor Hay, has one set, Berlin’s apartment, and photos of family members and celebrities are flashed in his ‘mirror.’  Other times, segments of films are projected across the windows, the Christmas tree, and furnishings, obscuring some of the images.

Berlin epitomized the American dream, coming to this country as a penniless immigrant and eventually becoming an incredible success. He was also a shrewd businessman. As a young man, he gave up the rights to his songs, but cleverly bought them all back. That decision saved him from financial ruin during the stock market crash of 1929. The composer’s life spanned over 100 years and the show describes the influences of history on his life and his music, from the pogroms in Russia, to World Wars I and II, the civil rights movement and anti-Semitism.

The audience learns a great deal about Berlin’s contributions. He wrote over 1000 songs, 25 of which hit number one. He gave all the royalties for “God Bless America” to the Boy and Girl Scouts.  He was a co-founder of ASCAP (American Society of Composers, Authors and Publishers). To have more control over his work, Berlin and his partner Sam Harris built the Music Box Theatre, which is still in operation on 45 Street, assuring that musical theater will always have a home on Broadway.

The show includes a sampling of Berlin’s standards, such as "Blue Skies,” "Always," "Anything You Can Do I Can Do Better," "There's No Business Like Show Business," "Cheek to Cheek," "A Pretty Girl is Like a Melody," and "Oh! How I Hate to Get Up in the Morning.”  Felder is a skilled pianist and plays the songs with a flourish, even accompanying the singers on the screen.

Hershey Felder as Irving Berlin will resonate best with people of a certain age-those who grew up with Berlin’s music and feel sentimental about his songs.  As ‘Berlin’ relates his stories, many in the audience audibly reacted, sighing, gasping and even applauding. When the composer asked the carolers to sing along, most knew all the words to the songs.

If you can appreciate patriotism without divisiveness, then you will appreciate the last lines of the musical. When Berlin is asked why he created his music, he responds that he did it for “love and patriotism.”

Review of ‘The True’
Review of the Public Theater’s ‘Twelfth Night’...
Review of ‘Smokey Joe’s Cafe’
Review of Anne Carrere in ‘Piaf! The Show...