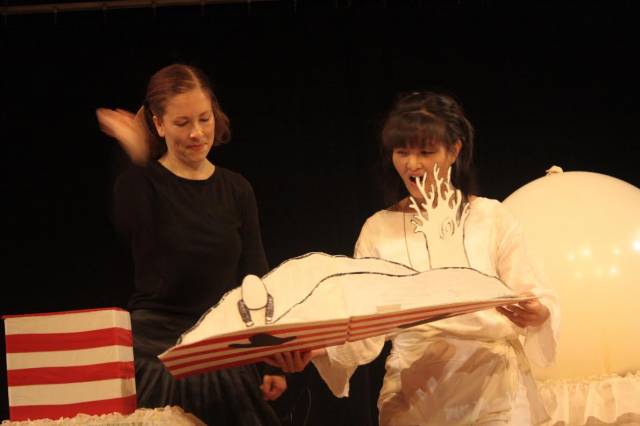 Walking through the East Village, I found myself thinking about my bygone college days gallivanting down 4th Street for one-woman shows, drinking in dive bars and grabbing late-night fried chicken from the now shuttered Mama’s Food Shop. My wandering memory of this once wild neighborhood shifted abruptly as I approached La Mama’s first floor theater to find throngs of children and their parents waiting outside for an 11am performance of I Laid an Egg, an original piece by Double Image Theater as part of the family programming for the 2015 La Mama Puppet Series. The venue was packed with a diverse crew of eager pre-schoolers accompanied by their chaperones, referred to as their “tall people” by the theater staff.

The seating was strictly segregated - short people (children) on the ground in the front, tall people (adults) in chairs in the back. This division of the audience reverberated throughout the entirety of the short piece. The sight lines were absurd - nearly all the action was obstructed from the adult perspective, and the real magic was all occurring between the performers and the kids up front. This production is decidedly not of the current Hollywood school of entertainment for young audiences, that seeks to draw in adults with equal attentiveness and consideration shown to prospective kids. This production of the play was for kids. For that reason, I will focus primarily on the experience I witnessed the children having, and will return later to tease out the question this production brought up for me about creating art for “family.”

I Laid an Egg was created by Double Image Theater co-founders Spica Wobbe and Margot Fitzsimmons, and is inspired by Margot’s childhood dream. The piece follows Margot, played with exuberance by Liz Parker, on an adventure through an imaginary world made of shadows and household items, filled with eggs of all sizes and infinite potential. Liz Parker and Spica Wobbe perform the abstract piece without dialogue, and both women are clearly confident working in front of children. The soundscape of the play is heavily influenced by the natural cacophony of the whispering, giggling, wriggling audience. The performers fully embraced the vocal crowd and the adults seated in my section seemed at ease, knowing that the occasional outburst would be received as a contribution to the story, not as a disruption to the play.

The piece features impressive hand-crafted pop-up books, puppets, and finds visual magic with simple objects - a flashlight against a white balloon creates a glowing orb that delights children. There is very little in the way of plot, the story is more like a short visit to a child’s imagination. I was impressed by the insight this narrative choice revealed about the artists’ understanding of their intended age-group. Wobbe and Fitzsimmons both received their Masters in Educational Theater from New York University, where the play’s director, Nancy Smithner, Ph.D. is currently a professor. This thorough understanding of the intersection between art and education is evident in every element of the piece. The imaginative play manages to retain an experimental artistic spirit while providing a open creative space for young audiences.

This brings me back to the essential conflict I had with trying to apply a critical lens to such a production. Is it fundamentally fair to criticize a piece of children’s theater for some relatively poor dramaturgical elements? Just because companies like Pixar and DreamWorks have made it a part of their mission statements to appeal to adults, does that mean all art for young audiences must share that goal? Obviously the answer is - No. There should be space for work that is unapologetically for kids. La Mama makes a clear distinction between their MainStage shows and their family programming, and I think it is a wonderfully New York objective for a cultural institution known for experimental innovation to offer programming that encourages imaginative play and hands-on learning for the next generation of future artists and audiences. The kids I spoke to after the performance all provided rave reviews and their parents all beamed to see a positive response to something new. With that said, I will personally continue to struggle with the phrase “family-friendly” as that feels slightly too broad a description. I would describe the experience as “short people-friendly” / “tall people-tolerant.”