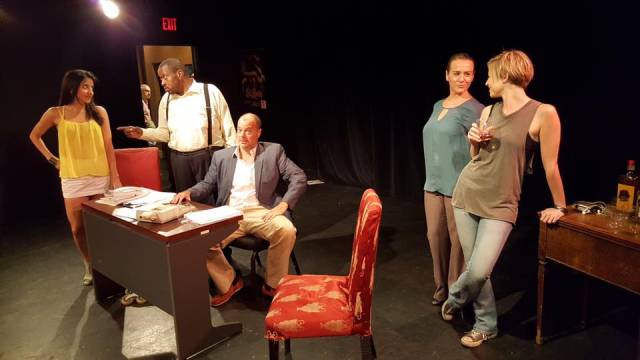 Barba's quiet humor as an older man (he offers to go "trip the light fantastic" at the club with his younger coworkers at one point) plays well in Frankie's decision to do more with his life, and thus inviting a professor of feminist studies to observe the production company for a scientific research paper. He is a good balance to Tony White's irascible but lovable Richie, whose spectacular delivery of his lines got the biggest laughs. (When asked to deliver homemade muffins to the crew, he asks if he looks like a runaway slave.)

Jessica Alexandra Green, Patricia Perales and Kristin Carter as Kit, Linda and Monica, respectively, present the audience with a trio of female characters who are all smart and focused on what they do for a living without believing they have to sacrifice relationships as a result. Green's Kit is an up-and-coming film director with a penchant for films about the Hong Kong underground and has seen Breathless by Jean-Luc Godard about 30 times. She is working on a screenplay for "Highway 69." She strikes up a relationship with Carter's Monica, the professor observing them. Her Kit is fun and sassy, but shows her vulnerable side without ever being maudlin.  Carter is spot-on as Professor Monica Silk, from her speech patterns to her hand gestures, down to her toe pointed in her sensible burgundy pump. She is tenured and lives and breathes academia, even while getting to know people in a world far removed from her own. Perales' Linda shines in her interview with Monica, where she breaks down stereotypes of women in porn. She makes her points without being defensive and presents a solid case.