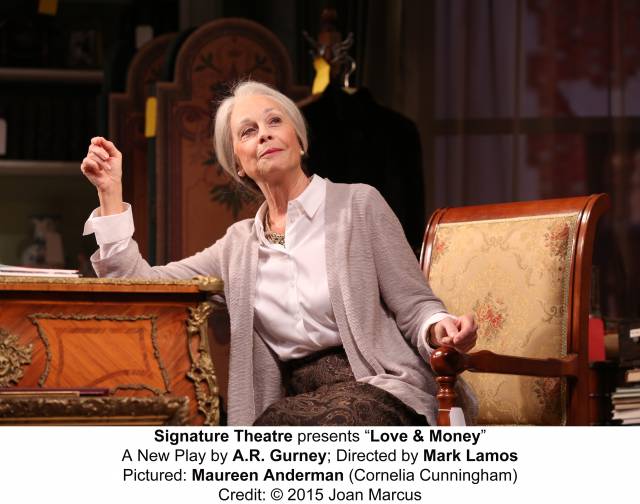 What would a wealthy, white widow of a certain age do if someone she had never met before claimed to be the secret love child of her beloved, departed daughter? What if the person in question was a young black man? This is the scenario in which themes of race, class, consumerism and culture unfold in the delightful new comedy Love & Money, by legendary playwright A.R. Gurney.

Love & Money, directed by Mark Lamos, takes place in the opulent living room of Cornelia Cunningham (played by Maureen Anderman), who is determined to give away all of her earthly possessions in an effort to right what she proclaims as the evils of money (alcoholism, debauchery, indecisiveness and even fun, which is "another WASP requirement," says Cornelia). Tags line the antique furniture crowding her apartment where she writes checks to nonprofit organizations like the International Rescue Committee and Save the Children. Harvey Abel (Joe Paulik), a young lawyer recently appointed to her case, warns her that there is a man claiming to be her grandson, which could jeopardize the plans for her estate if he contests her will for a sizable inheritance.

Coincidentally on the very same day, Walker Williams (Gabriel Brown), who goes by Scott in the play -- as in F. Scott Fitzgerald, of course -- shows up to the annoyance of Harvey and Cornelia’s loyal maid, Agnes (Pamela Dunlap), both taking him for a charlatan. Scott is done up in a suit and armed with an elaborate tale in an open nod to John Guare's Six Degrees of Separation.

Cornelia isn’t as naive and blinded by liberal guilt as as she appears. She is, however, drunk on the power of money and what she can do with it, which makes her affinity for, and rapport with, Scott delicious to watch. With overt references to The Great Gatsby and Cole Porter tunes played on the piano, courtesy of a Juilliard student named Jessica Worth (played by Kahyun Kim), Love & Money is ultimately about one person at the end of her life, wanting a life of simplicity, and another at the beginning of his life, consumed with the desire for so much more.