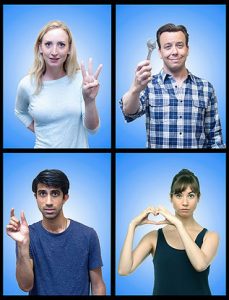 What is the mechanism? This is the question that To-By-For’s Mechanics of Love asks, taking a “How Stuff Works” approach to understanding everything from cars to love.

Glen (Sathya Sridharan) lives with a condition that causes him to forget people. When he (once again) forgets that he’s married to Faizi (Victoria Frings), he marries Francesca (Anastasia Olowin), a ballerina with an artificial spine. Though at first upset with her husband, Faizi finds herself charmed by Francesca, and invites the whimsical dancer to live with her and Glen. What follows is a love square between the odd trio and Georg (Eric T. Miller), Glen’s mechanic friend.

As the four fall for each other at different times, forming and reforming couples amongst themselves, playwright Dipika Guha invites us to question the mechanism that powers love. The exaggerated oddness of her love square hyperbolizes the idea that loves makes us all do strange things, making Glen increasingly desperate to figure out the mechanism behind it all.

Guha’s writing sparkles with quirky humor, as the play’s offbeat premise translates into an unconventional but utterly charming, funny tone. Under Elena Araoz’s direction, the cast delivers that offbeat quality impeccably. Frings in particular nails her character’s idiosyncrasies, to hilarious effect, while Miller’s incredulousness at the plot’s strangeness gives him a more grounded humor. Olowin’s performance as a ballerina whose dance skills leave everyone underwhelmed gets at the heart of the play’s quirkiness.

The scenic design is simple – designer Justin Townsend adorns the stage with only a stool and steps – but its simplicity suits the play’s fluidity. Everything about the characters’ lives, from their jobs to their significant others, proves impermanent as they switch places and shift positions, and the barebones set makes these shifts easy by refusing to tie them down to a material setting. Even the furniture is set on wheels: it moves with the characters, and nothing stays in the same place. Townsend’s brilliantly simple set echoes Francesca’s forgetfulness. She can only remember things if she has to imagine them, and the set puts us in her shoes, forcing us to imagine everything. Michael McGee’s lighting design counteracts the simplicity of the set by establishing a clear atmosphere for each new scene, from the dreamily dim dance sequences to the flickering overheads of the supermarket.

With Mechanics of Love, the Paradise Factory presents a tremendous play, one that keep the audience laughing even as it questions the inner workings of their hearts.