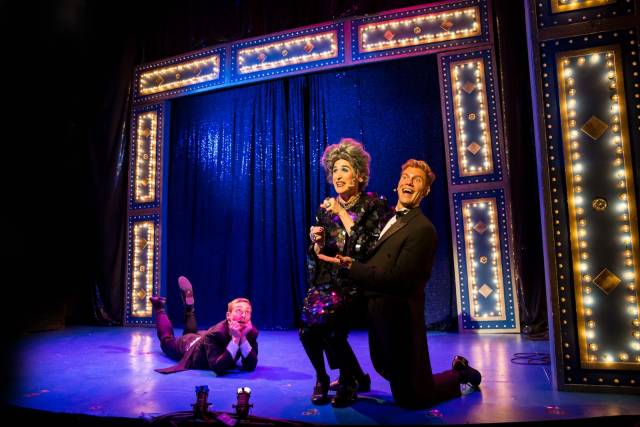 Poor Mrs. Smith (David Hanbury) has lost her dear cat Carlyle and in order to find him she’s put on a show titled Mrs. Smith’s Broadway Cat-tacular in hopes that he will come back to her, and also to recruit some fellow searchers among the audience members. Upon appearing onstage accompanied by “The Broadway Boys” (Brandon Haagenson and Ken Lear) one of Mrs. Smith’s first requests to the audience is that we all turn towards the door and call Carlyle’s name in unison; perhaps he will hear us and show up. This is one of a few times in which the show calls for audience participation, but unlike other acts in which this seems like an imposition on the audience, Mrs. Smith’s plea is so urgent that one can’t help but want to assist her.

She tells us of how she and Carlyle first met when she was a little girl, and how the two of them went on to form one of the most exciting duos in all of entertainment going on to conquer Broadway and the nightclub scene. Then one day Carlyle decided to quit show business and disappeared mysteriously leaving very few traces behind. Desperate ever since, Mrs. Smith has traveled the world trying to find her dear friend and welcome him back into her world. The joy in Hanbury’s performance as the eccentric entertainer is that as she shares her outlandish stories (something about ending up drunk on grapefruit juice at Pat Nixon’s birthday brunch…) she becomes only more and more captivating, perversely seductive even.

Adding feline references to standards such as “The Man That Got Away” and “Zing Went the Strings of My Heart” shouldn’t be as hilarious as it is when done by Mrs. Smith, whose voice and awkward dancing make for a combination of Elaine Stritch, Liberace and Grandma Yetta from The Nanny. In numbers as “One night in Bangkok”, Mrs. Smith gets to bring out her inner disco diva and has the entire audience moving along with her. Conceived by Hanbury and directed by Andrew Rasmussen, who gives it a grand cabaret feeling, Mrs. Smith’s Broadway Cat-tacular is an unexpectedly delightful treat.