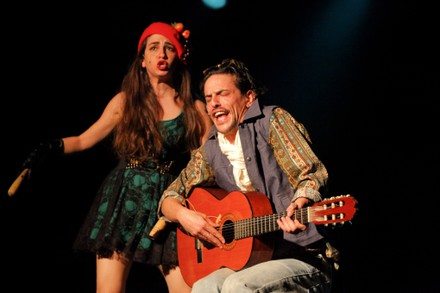 Hailing from Israel, the extravagant theatre group Tziporela might as well be advertised as coming from Saturn. Such is their genre-defying uniqueness that you might have a hard time believing the people onstage are actually human. In their show Odd Birdz, they sing, fly across the stage, do puppetry (with their feet!), use markers and white t-shirts to comment on gender conventions, perform endlessly expressive wordless routines, then they come back and sing some more, and all of this happens in under less than two hours!

The alien-like theme of the show is perfectly encompassed in its opening vignette, which has two rows of chairs aligned onstage, in which we see the troupe reenact a series of situations that might occur when one attends a movie. A couple fights and then makes up, an elderly woman takes forever to get across to her seat, a loud muncher annoys another patron...and all along the actors are looking at us, we sitting in the audience are their show, as they establish that the troupe’s intention is to study the single oddest elements in human behavior and exploit them not necessarily for ridicule, but as pure anthropological research.

After this introduction we see a series of vignettes in which the troupe will deliver criticisms of bureaucracy, racism and international relations, all done with enough self-awareness and good humor, that it comes as no surprise when the moment arrives and they make fun of themselves, in a thrilling sketch in which two of the actors play audience members who interrupt the show in order to complain about it being “too off-Broadway”.

What’s most remarkable about Odd Birdz, is that despite its incessant energy and the troupe’s obvious need to please, they never come off as grating or exhausting, instead they truly try to deliver something for everyone making it the rare spectacle that’s both creative and humble. The recurring nature of some of the sketches (a singing duo formed by Dana Ivgy and the chameleonic Ben Perry is great, and good luck getting “Something Stupid” out of your head afterwards...) often make it feel like an episode from a larger variety show, which makes one wonder just how limitless the troupe’s creativity could be if they were given a permanent venue to develop weekly shows for example. For now though, Odd Birdz is more than worth a visit to planet Tziporela.