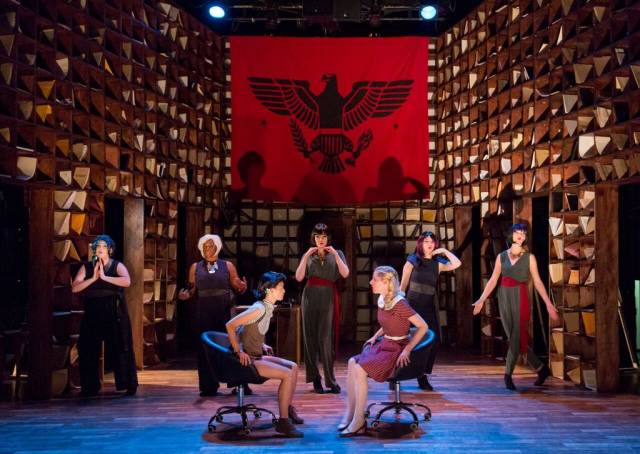 The world premiere of Mac Wellman’s new play, The Offending Gesture, opened January 9 at the Connelly Theater. Wellman is well-known – and very well-regarded – as the head of the Playwriting MFA program at Brooklyn College (which has produced myriad prolific New York playwrights, from Annie Baker to Thomas Bradshaw to Young Jean Lee). But with Offending Gesture, the playwright-professor reminds us that he has a voice as singular and strong as any of his former students.

Though it’s being performed in a relatively small and easy-to-miss East Village theater, there is something astonishing about every aspect of this encouragingly strange production. It is very much a piece of theater dictated by the writing: it stars Adolf Hitler’s talking dog and her Finnish dog friend who performs the Nazi salute repeatedly and sometimes unthinkingly (this is the titular gesture). But behind all of this good-natured silliness is a message about the grander absurdity of foreign policy in Iraq, from World War II to the present.

Such ambitious material could inhibit the creativity of the collaborators in some productions. But not here. The set design – by Christopher and Justin Swader – is magisterial, complete with a massive Nazi banner on which eerie shadows are projected. Alaina Ferris’s musical composition befits the subject material perfectly, alternating seamlessly between playful and haunting. And the acting is often so entrancing that it makes the immediate moment feel lost – removed from the ridiculous reality it is bound to. Layla Khoshnoudi is at the center of the eclectic cast as Noble Wolf (a translation of “Adolf”); she is surprising in every scene. She’s almost always acting funny, but she manages to introduce some new manner of funniness whenever she appears.

The Offending Gesture is a strange piece, and not just because of the incongruous little stage world it constructs. It reminds us of the nightmarish foreign policy decisions that have helped to open Iraq up to the catastrophic violence taking place on its soil today. And it places these foreign policy decisions in a long list of poor ones, all the way back to the Third Reich (literally and metaphorically). But even with all of this weight, it doesn’t fail to amuse us in a simple, farcical, almost slapstick style. Wellman’s message might be buried in absurd humor, but then again, that might be the point: he’s made sure I can’t fully explain the thing to you. You’re going to have to witness the gesture for yourself.