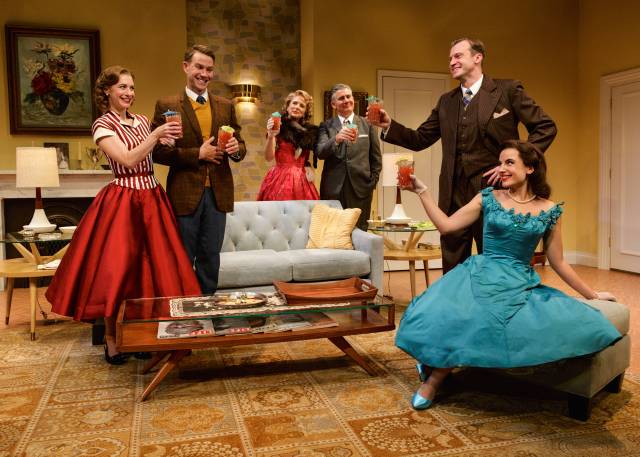 Topher Payne’s moving comedy, Perfect Arrangement, presented by Primary Stages at the Duke on 42nd Street will appeal to a broad audience with its sharp dialogue and beautiful visuals, and that’s important, because this plucky piece of theater is a Trojan horse delivering a complicated conversation about gender equality, LGBTQ rights and personal shame. The production elements are very strong with impeccable costumes by Jennifer Caprio and a vivid golden-hued set designed by Neil Patel. The play feels meticulously well-crafted under the direction of Armenian/Israeli theater director, Michael Barakiva, with quick changes and rapid entrances galore.

Set in 1950, the play follows two US State Department employees, Bob and his secretary, Norma, who have been assigned the task of identifying and removing sexual deviants from within their ranks. It is quickly revealed that both Bob and Norma are gay, and the play’s title refers to the arrangement they have made to marry each other’s partners to provide a palatable public facade. The two couples live as neighbors, in houses adjoined by a hidden door in a closet. The metaphor is perhaps a bit heavy-handed, but the literal use of “the closet” as a space for travel, concealment and safety leads to some particularly enjoyable comedic moments. Over the course of the play, the perfection of this arrangement is tested as the characters confront their discomfort with Bob’s vigorous approach to his new position of power. In one especially poignant exchange, Norma (the compelling, Julia Coffey) alleges, “You know, Bob, our problem isn't that other people think we're immoral and disgusting. It's that deep down, you agree with them.”

The dramatic second act establishes more questions than it offers answers. At times the moralistic stance of the characters creates a reductive framework that doesn’t allow space for a more complicated exploration of personal choice and social consequences. A strong and definitive line is drawn between bravery and cowardice that dismisses some legitimate practical concerns. In these moments, the characters seem to act with prescient knowledge of their future fate, leaving others squarely on the wrong side of history.

One of the most refreshingly progressive aspects of the play is its talented cast of characters, featuring four strong, ambitious female roles. No one is relegated to ingenue status, each woman on stage is demonstrably complex and powerful. This in itself feels like a radical stance for a male playwright to take. The well-paced play is driven by strong performances by all. As Norma’s lover and Bob’s wife, Millie, Mikaela Feely-Lehmann has the most to work with in terms of character arc, and she attacks the role with the rigor and passion of a promising emerging actress embodying a character worthy of her talents. Kelly McAndrew delivers a powerhouse performance as Barbara Grant, a person from Millie’s past and a present character of interest in Bob’s investigation. In awe of Ms. Grant, Bob’s partner Jim (played impressively by Christopher J. Hanke) can’t help but remark, “God, You’re Fabulous.” The audience I experienced heartily agreed.