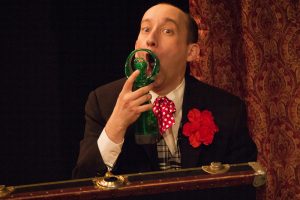 Playlab NYC describes its production of “Professor Ralph’s Loss of Breath” as “Punch and Judy meets the Book of Job in Professor Ralph’s neglected masterpiece." What should be added to this description is “an adaptation of Edgar Allan Poe’s short story ‘Loss of Breath’ with a continual infusion of literary, cinematic, and musical allusions as well as periodic injections of words and phrases from the contemporary American lexicon." Although that description would be absurdly long, it’s necessary because the authenticity of playwright “Professor Ralph Phillips” is doubtful (but not explicitly so). And questioning the identity of the primary playwright is an unfortunate distraction from an otherwise rousing and droll 60-minute theatrical experience.

For audience members who don’t know, “Punch and Judy” is a style of puppetry that borrows from the Italian commedia dell’arte, which uses stock characters and usually improvised vignettes to tell a funny story. The puppeteer in a Punch and Judy show is called “Professor” (hence, Professor Ralph Phillips); Punch and Judy are husband and wife, respectively, and Punch is an often violent trickster. In the human production “Professor Ralph’s Loss of Breath”, the gender roles reverse: On their wedding night, Mr. Lackobreath (Scott Michael Morales) discovers that his new bride, Amaryllis (Robert Berliner, playing one of numerous characters), has been unfaithful. They argue. Amaryllis strikes her husband, causing him to lose his breath and flee. The interminably unfortunate Lackobreath spends the next twelve scenes trying to overcome mishaps, recover his breath, and make his way back home.

Directed by Kevin P. Hale, Berliner and Morales give slapstick performances with skill, energy, and commitment while delivering quick dialogue, improvising, singing, and prompting audience participation. In addition to the Punch and Judy parallels (which no one needs to know to enjoy the play), the moral of perseverance when confronting adversity combined with the costumes, which are sometimes exaggerated (Lackobreath’s head-to-toe clownish make-up and attire) and sometimes spare (Devil’s tiny red horns), provide an old-fashioned quality. And the direct nods to such familiar cultural references as Richard III’s “My kingdom for a horse”, “The Man on the Flying Trapeze” (song and movie), “The Devil Went Down to Georgia” by the Charlie Daniels Band, and even a line from the movie “Young Guns II” exemplify the social and cultural community that the playwright, actors, and audience members share.

Although many regard “good” New York theater as esoteric, “Professor Ralph’s Loss of Breath” offers mainstream appeal and receives genuine laughter from the crowd (including rapt children). Its only fault is the dubious “Professor Ralph Phillips”, who seems like a mash-up of Edgar Allan Poe and a minor Looney Tunes character. To keep the audience in on the joke, there should be either more transparency or all absurdity for behind-the-scenes players (although Hale probably wants others to suspend their disbelief on this one).