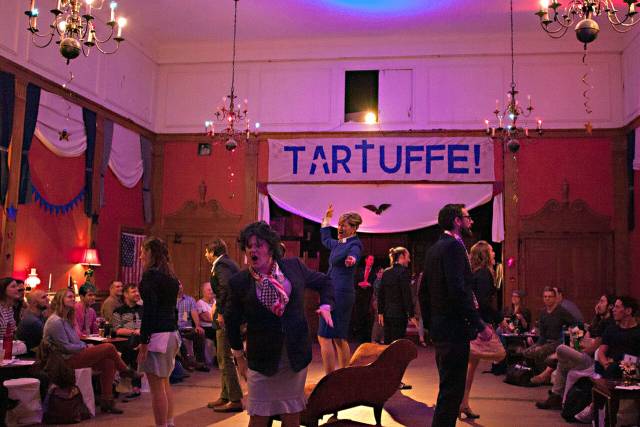 Does this sound familiar? A pompous, overtly religious moralizer prepares to run for political office only to be revealed as a hypocrite.

Satirization of religious and moral hypocrisy rears its head once again in Molière’s classic play Tartuffe, freely adapted by the booze-drenched company Three Day Hangover in a production especially designed to skewer the current political scene. The locale is the palatial home of Olga, a wealthy Tea Party activist in an unnamed “Red” state. Wearied by the death of her Reagan-esque father and the disappointment she feels in her children, Olga has found her savior in the pious Tartuffe, whom she has decided to groom into a political star. Tartuffe is only too happy to oblige her; the object of his personal crusade is the nation’s irreligious vice and sin, particularly that of the LGBT community. But before long Tartuffe’s hypocrisy appears, as it is wont to do among the ostensibly uber-moral. Adaptor Jake Brandman has created a recipe that is three parts Molière, two parts Stephen Colbert and one part Kirby Dick’s Outrage.

The concept by director Beth Gardiner is quite clever. The audience occupies the same space as the performers, as does a large, well-stocked bar. The actors improvise hilariously with the audience, who is encouraged to drink as much as possible during the entire evening. The show actually stops for an elaborate drinking game every time a particular line is uttered (I lost count after this happened six times). Surprisingly, this did not stop the momentum of the show.

Carol Linnea Johnson is simply marvelous as Olga. Her highly energetic take on the role is infectious: she is charming and extremely funny in the role of the manic, duped political crusader. As Tartuffe, Tom Schwans is every bit the charming, unctuous schemer. Flashes of Ralph Reed and Pat Robertson creep into his smirk, and just as Molière wrote him, he becomes a smiling, unrepentant hypocrite in an instant. Leah Gabriel is the perfect Doreen, and Sean Tarrant provides an interesting turn as Elmer, husband to Olga and a key player in Tartuffe’s perfidious plot. Abbey Siegworth is utterly zany as Olga’s daughter Mary, who has a rather obvious problem on her hands. The entire cast is hilarious and unpredictable, like the hilarious drunks you always want to invite to your parties.

This Tartuffe is not subtle. Some of Molière’s softer flashes of humor and pathos are dispensed with entirely, and for some the concept will come across as far too on-the-nose. But the energy is irresistible, and so is Molière’s razor wit in the unrelenting hands of these actors. Although the theme of religion-soaked hypocrisy lends itself almost too easily to the political right, the left is lampooned as well, particularly in the character of liberal gasbag Clint (formerly Molière’s Cléante). No even-minded sage here, Clint is the very embodiment of the obnoxious liberal who so righteous he embarrasses his fellow liberals.

There is a very specified spin on Tartuffe’s hypocrisy. I won’t reveal it here, but those familiar with the play will nose it out by the gender switching of Orgon/Olga. It changes the character of Tartuffe hardly at all. He is the same infuriating hypocrite theater goers have loved to hate for two hundred years. The biggest change in the play takes place near the end, when the audience members are asked to vote on the fate of Tartuffe. The night I saw it the audience voted to keep Molière’s denouement. I suspect that is nearly always the case.

Due to the flowing booze, the show is reserved for those 21 and over. The night I saw it the audience clearly had a ball. It is recommended for those who enjoy theatrical inventiveness and anyone who loves the classics but has grown bored with ossified productions of them.